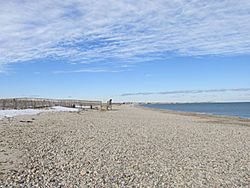 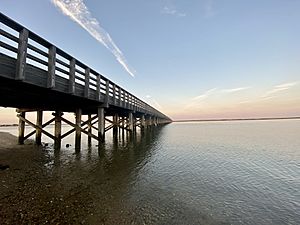 Powder Point Bridge connecting Duxbury Beach with the town of Duxbury. Bridge was in the Guinness Book of World Records for being the oldest and longest wooden bridge in the world, until it was damaged by fire and completely rebuilt in 1986.

It is a barrier beach, defined by sand dunes, Rosa rugosa, and beach grass. It is 50 yards wide at some points, and is the sole land access to the villages of Saquish and Gurnet Point across the town line in Plymouth, the only land area where the two towns meet. The northern residential end is protected by an Army Corps Of Engineers concrete seawall.

The beach is near Plymouth Light and the remains of the Civil War Fort Andrew and Fort Standish. Fort Andrew was preceded by Gurnet Fort in the Revolutionary War. It is only accessible when the lighthouse has an open house for visitors.

One of the first trans-Atlantic cables came ashore here at Rouse's Hummock, and the first call was made on it (to President James Garfield) by Napoleon III.

It is the home of the former Gurnet Classic Beach Run.

Piping plovers nest there, protected by the town's conservation officers, as well as from Duxbury Beach Reservation. There is a town beach and a public beach. The north end is developed, while the southern end is marred only by an access road.

Duxbury Beach suffers terribly in hurricanes and nor'easters. It is widely considered to be the focal point of damages in both the Blizzard of '78 and the 1991 Perfect Storm.

All content from Kiddle encyclopedia articles (including the article images and facts) can be freely used under Attribution-ShareAlike license, unless stated otherwise. Cite this article:
Duxbury Beach Facts for Kids. Kiddle Encyclopedia.