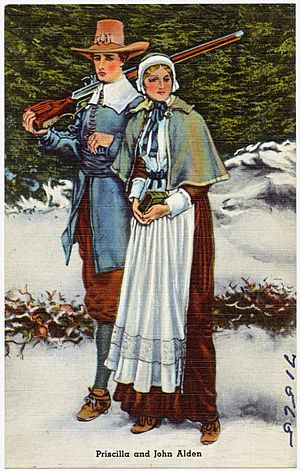 According to the Department of the Interior's press release:

The John and Priscilla Alden Sites property consists of the c. 1700 Alden house and the c. 1632 original Alden Homestead site. The property owes it significance to the cultural impact of The Courtship of Miles Standish, a poem about the courtship of John Alden and Priscilla Mullins, written by Alden descendant Henry Wadsworth Longfellow and published in 1858. The public embraced the poem. It became one of the most popular national origin stories in American folklore.

The property also is the location of important archeological fieldwork and analysis by Roland Wells Robbins (1908-1987), a pioneer in the field of historical archeology, making the site of national significance in the development in this field. Robbins located and excavated a foundation of the original Alden home in 1960, which yielded nationally significant data that shed light on the lifeways of the first English settlers in North America. 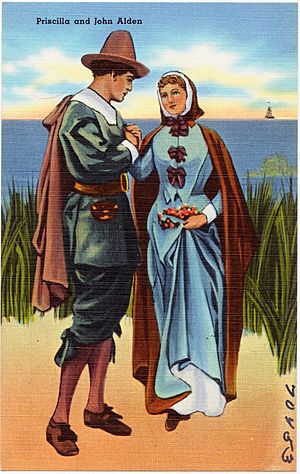 This property is the site of John Alden's original home. It was built about 1632. John and Priscilla Alden first lived in this house. Traditional accounts say the house was abandoned around 1653. The building has not survived. The property is now an important archeological site. It is owned by the Town of Duxbury.

The John Alden House is a historic house museum that was supposed to be the home of John and Priscilla Alden. It is located at 105 Alden Street in Duxbury, Massachusetts. Family tradition says it was built in 1653. Scientific testing of the beams says the house was built about 1700.

John and Priscilla Alden Family Sites was added to the National Register of Historic Places in 1978. The sites were declared a National Historic Landmark on October 7, 2008. The Alden Kindred of America, Inc. is a non-profit organization that owns and takes care of the John Alden House.

All content from Kiddle encyclopedia articles (including the article images and facts) can be freely used under Attribution-ShareAlike license, unless stated otherwise. Cite this article:
John and Priscilla Alden Family Sites Facts for Kids. Kiddle Encyclopedia.