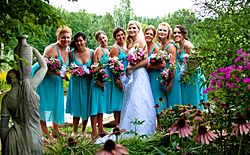 Seven bridesmaids in matching dresses, with the bride

A bridesmaid is a member of the bride's group in a wedding. A bridesmaid is usually a young woman, and often a close friend or sister. She helps the bride on the day of a wedding or marriage ceremony. Traditionally, bridesmaids were chosen from unmarried young women who were old enough to be married.

All content from Kiddle encyclopedia articles (including the article images and facts) can be freely used under Attribution-ShareAlike license, unless stated otherwise. Cite this article:
Bridesmaid Facts for Kids. Kiddle Encyclopedia.