There are eight counties that combine to form Greater San Antonio. The central county is Bexar.

Greater San Antonio has a number of communities spread out across several counties and regions. It is centered around the City of San Antonio, the second largest city in Texas and the seventh largest city in the USA, with roughly 1.4 million residents spread across approximately 500 square miles. Other regions include the Randolph Metrocom and the surrounding counties.

Downtown San Antonio is the urban core of the metropolitan area. 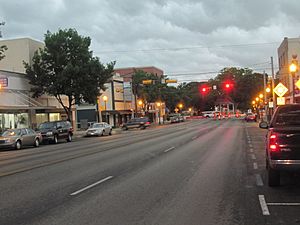 New Braunfels is the second largest city in the metropolitan area and is a satellite of San Antonio. 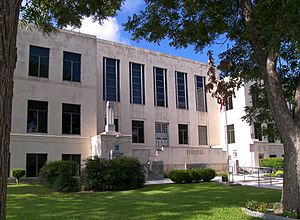 Seguin is the fourth largest city in the metropolitan area and is a satellite of San Antonio. 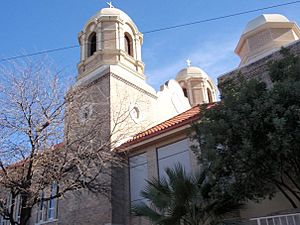 Places with fewer than 1,000 people 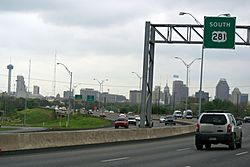 The San Antonio International Airport (SAT) is located in Uptown San Antonio, approximately eight miles north of Downtown. It has two terminals and is served by 21 airlines serving 44 destinations including six in Mexico.

VIA Metropolitan Transit is the metropolitan area's public transportation authority, serving the entire City of San Antonio and many of its suburbs throughout Bexar County.

University of Texas at San Antonio

The city has many private institutions as well, such as Our Lady of the Lake University and St. Mary's University on the inner west side. Trinity University and the University of the Incarnate Word are in Midtown. The Culinary Institute of America maintains its third campus in downtown.

Texas Lutheran University in Seguin and Howard Payne University at New Braunfels, now offering classes at a local high school but will soon have a true campus in the Veramendi Development, are the only higher education institutions in the area outside of San Antonio city limits.

The San Antonio area has many public elementary and secondary schools sorted into the following independent school districts:

The city of San Antonio is home to only one Major League sports team; the San Antonio Spurs of the NBA. The city's football team is the UTSA Roadrunners who compete at the NCAA FBS level. Multiple minor league teams play in San Antonio, including San Antonio Missions and San Antonio FC.

All content from Kiddle encyclopedia articles (including the article images and facts) can be freely used under Attribution-ShareAlike license, unless stated otherwise. Cite this article:
Greater San Antonio Facts for Kids. Kiddle Encyclopedia.