Pleasanton is a city in Atascosa County, Texas, United States. The population was 8,934 at the 2010 census. Pleasanton's official motto is "The City of Live Oaks and Friendly Folks." It is part of the San Antonio-New Braunfels Metropolitan Statistical Area.

Pleasanton honors its cowboy heritage with the "Mr. Cowboy" sculpture in front of City Hall and across from the giant oak tree downtown. The roots of the cattle kingdom can be traced to Atascosa County in the 1860s, which calls itself "the birthplace of the cowboys." The sculpture is a gift of Ben and Mona Parker. The Longhorn Museum in east Pleasanton on Highway 97 contains artifacts and memorabilia of the cowboy years. The Cowboy Homecoming, begun in 1966, is an annual event held at the Atascosa River Park in Pleasanton.

Pleasanton was established in 1858 when conflicts with the Indians caused the settlers to move the location of the county seat from Amphion. The settlers chose the current town site because of its location at the mouth of Bonita Creek. John Bowen (died 1867), San Antonio's first Anglo-American postmaster, founded and named the town of Pleasanton after his good friend and fellow early Texas Settler John Pleasants.

Along with San Antonio, Uvalde, Crystal City, Carrizo Springs, and Corpus Christi, Pleasanton was a major stop on the now-defunct San Antonio, Uvalde and Gulf Railroad, which operated from 1909 until it was merged into the Missouri Pacific Railroad in 1956. The rail headquarters was located in a modern two-story depot in North Pleasanton beginning in 1913. However, headquarters closed in 1926, and later the SAU&G, or the Sausage Line as it was called, was merged into the Missouri Pacific. The headquarters depot has been razed, but an earlier depot in Pleasanton is displayed at the Longhorn Museum. The remaining San Antonio-to-Corpus Christi freight line is under the Union Pacific system.

In November 1957, the citizens of Pleasanton voted overwhelmingly to desegregate the public schools. This came some two months after the crisis at Little Rock Central High School in Arkansas. Some three dozen African American pupils were then integrated into the Pleasanton school.

According to the United States Census Bureau, the city has a total area of 8.5 square miles (22 km2), all land.

Most soils of Pleasanton are quite sandy at the surface but have a clay-rich subsoil which holds moisture. They belong to the Alfisol soil order. Common soil series in town are Nusil, Poth and Rhymes.

There were 2,941 households out of which 39.0% had children under the age of 18 living with them, 52.8% were married couples living together, 15.0% had a female householder with no husband present, and 27.4% were non-families. 23.7% of all households were made up of individuals and 11.7% had someone living alone who was 65 years of age or older. The average household size was 2.77 and the average family size was 3.28.

Part of the film The Sugarland Express was filmed around the intersection of 2nd Street and Commerce Street. Every year, Pleasanton hosts the "Cowboy Homecoming Festival", which commemorates the time when the cowboys driving cattle from South Texas to the rail heads up north would return home. This event takes place each October. 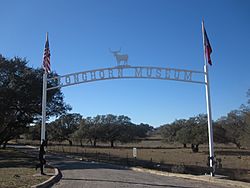 All content from Kiddle encyclopedia articles (including the article images and facts) can be freely used under Attribution-ShareAlike license, unless stated otherwise. Cite this article:
Pleasanton, Texas Facts for Kids. Kiddle Encyclopedia.