Uvalde ( yoo-VAL-dee) is a city in and the county seat of Uvalde County, Texas, United States. The population was 15,751 at the 2010 census.

According to the United States Census Bureau, the city has a total area of 7.6 square miles (19.8 km2), all of it land.

Uvalde is known as one of the best locations for soaring in the United States. It is the site of the 1991 and 2012 World Gliding Championships.

The climate in this area is characterized by hot, humid summers and generally mild to cool winters. According to the Köppen Climate Classification system, Uvalde has a humid subtropical climate, Cfa, on climate maps. 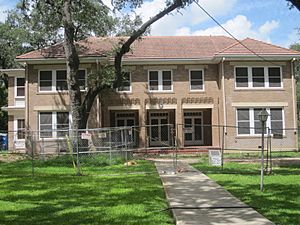 Uvalde, along with San Antonio, Carrizo Springs, Crystal City, and Corpus Christi, was a major stop on the defunct San Antonio, Uvalde and Gulf Railroad, which operated from 1909 until it was merged into the Missouri Pacific Railroad in 1956. From 1909 to 1912, the SAU&G was known as the Crystal City and Uvalde Railroad. The San Antonio-to-Corpus Christi freight route is now within the Union Pacific system.

The city is served by the Uvalde Consolidated Independent School District which serves Uvalde, Real and Zavala Counties. The school district has 10 schools.

Southwest Texas Junior College has a campus near Uvalde, next to Garner Field.

The City of Uvalde owns Garner Field, a general-aviation airport east of Uvalde.

Uvalde was the home of John Nance "Cactus Jack" Garner, former Speaker of the House and Vice President of the United States; Oscar-winning actor Matthew McConaughey; actress Dale Evans, movie star and singer-songwriter and wife of Roy Rogers; and former Governor of Texas Dolph Briscoe (after whom the post office is named). The city is home to the Grammy Award-winning Tejano/Norteño group Los Palominos.

Other notable residents include

All content from Kiddle encyclopedia articles (including the article images and facts) can be freely used under Attribution-ShareAlike license, unless stated otherwise. Cite this article:
Uvalde, Texas Facts for Kids. Kiddle Encyclopedia.