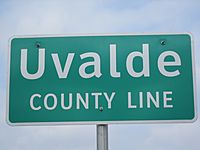 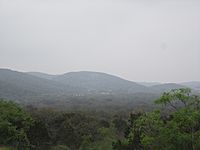 A scene of the Texas Hill Country in northern Uvalde County 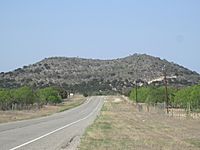 Uvalde County ( yoo-VAL-dee) is a county located in the U.S. state of Texas. As of the 2010 census, its population was 26,405. Its county seat is Uvalde. The county was created in 1850 and organized in 1856. It is named for Juan de Ugalde, the Spanish governor of Coahuila. Uvalde County was founded by Reading Wood Black who also founded the city of Uvalde, Texas.

Artifacts establish human habitation dating back to 7000 B.C. Evidence of a permanent Indian village on the Leona River at a place south of the Fort Inge site is indicated in the written accounts of Fernando del Bosque's exploration in 1675. Comanche, Tonkawa, Seminole and Lipan Apache continued hunting and raiding settlers into the 19th Century.

On January 9, 1790, Juan de Ugalde, governor of Coahuila and commandant of the Provincias Internas, led 600 men to a decisive victory over the Apaches near the site of modern Utopia at a place known then as Arroyo de la Soledad. In honor of his victory, the canyon area was thereafter called Cañon de Ugalde. French botanist Jean-Louis Berlandier visited the area in the late 1820s. James Bowie guided a group of silver prospectors into the area of north central Uvalde County in the 1830s. A trail used by General Adrián Woll's Mexican Army on its way to attack San Antonio in 1842 crossed the territory of Uvalde County and became the main highway between San Antonio.

Fort Inge was established in 1849 to repress Indian depredations on the international border with Mexico, and was served by the Overland Southern Mail.

One of the first settlers to the environs was William Washington Arnett, who arrived in the winter of 1852. The Canyon de Ugalde Land Company, formed by land speculators in San Antonio in 1837, began purchasing headright grants in Uvalde County in the late 1830s. Reading Wood Black, who with a partner, Nathan L. Stratton, purchased an undivided league and labor on the Leona River in 1853 at the future site of Uvalde. May 2, 1855, Black hired San Antonio lithographer Wilhelm Carl August Thielepape, and laid out Encina, the town later known as Uvalde. Waresville settlement by Capt. William Ware in the upper Sabinal Canyon and Patterson Settlement by George W. Patterson, John Leakey, and A. B. Dillard on the Sabinal River coincided with Reading Black's development of the Leona River at Encina.

In November 1855, Reading Wood Black successfully lobbied the Texas legislature to organize Uvalde County. On May 12, the county was formally organized. On June 14, Encina was named county seat. The second floor of the courthouse was made into a school, and six school districts were organized for the county in 1858. The San Antonio-El Paso Mail route was extended along the county's main road with a stop at Fort Inge in 1857.

Conflict between Mexicans and Anglos during and after the Mexican War continued in Uvalde County, with the reported lynching of eleven Mexicans near the Nueces River in 1855. Laws passed in 1857 prohibited Mexicans from traveling through the county.

Residents of Uvalde County voted 76–16 against secession from the Union. The abandonment of Fort Inge immediately after secession was followed by renewed Indian attacks. Many men in Uvalde County fought for the Confederacy, while some Unionists fled to Mexico to avoid persecution.

Uvalde County endured three decades of unrelenting lawlessness after the Civil War. Violence, lawlessness and Confederate-Union conflicts among citizens were so pervasive that armed guards were employed to assist the county tax assessor and collector, and the county had no sheriff for nearly two years. The years immediately following the Civil War were marked by conflicts between Confederates and Unionists returning to live in Uvalde County. Smugglers, cattle and horse rustlers, and numerous other desperadoes saturated the area, including notorious cattle rustler, J. King Fisher who was appointed Uvalde sheriff in 1881. Willis Newton of The Newton Gang robbed his first train near Uvalde. Jess and Joe Newton retired to Uvalde.

The Uvalde Umpire began publication in 1878 and the Hesparian in 1879.

The Galveston, Harrisburg and San Antonio Railway was built through the county, passing through Sabinal and Uvalde City, in 1881.

William M. Landrum introduced Angora goats to the area in the 1880s. By the turn of the century goats outnumbered cattle.

By 1905 the Southern Pacific had established railheads in Uvalde, Knippa, and Sabinal.

The local bee industry developed a product that received first place in the 1900 Paris World's Fair.

The National Fish Hatchery, completed in 1937, produced a million catfish, largemouth bass and sunfish in the 1970s.

Approximately $45 million was generated by farming in Uvalde County in 1974.

From the Mexican Revolution in 1910, immigrant labor force cleared large tracts of land and digging ditches, as irrigation spread throughout the county. The Uvalde and Northern Railway to Camp Wood, the Asphalt Beltway Railway in 1921, and the expansion of the asphalt mines in far southwestern Uvalde County at Blewett and Dabney were completed with the help of Mexican labor. By 1960 Mexican Americans made up one half of Uvalde County's 16,015 population. Seasonal migrant workers continued to move to Uvalde and Sabinal during the 1960s..

The Alien Land Laws of 1891, 1892 and 1921 prohibited ownership of Texas land by non-citizen residents. The laws were repealed in 1965 by the Fifty-ninth Texas Legislature. These and other discriminatory deed restrictions had limited Tejanos in the purchase of town lots in the county.

Efforts to gain civil rights for Hispanics in Uvalde County began with the establishment of the Tomas Valle Post of the American Legion. County churches maintained segregated places of worship until an integrated Catholic church emerged in Uvalde in 1965.

The Mexican American Youth Organization formed in Uvalde City in 1968 and eventually led to a 6-week walkout by more than 600 Mexican-American students an on April 14, 1970. The Texas Rangers and the Texas Department of Public Safety responded to requests by the school board to help control the volatile situation. Senator Walter F. Mondale, chairman of the United States Senate Committee on Equal Educational Opportunity, went to Uvalde on July 30, 1970, and criticized city officials in an interview published in the Uvalde Leader News.

A 1970 class action lawsuit was filed by Ms. Genoveva Morales on behalf of her children against the Uvalde Consolidated Independent School District.

In 1975, the United States Court of Appeals for the Fifth Circuit found that Uvalde C.I.S.D. in Texas had failed to desegregate its school system in violation of the Fourteenth Amendment to the United States Constitution and Title VI of the Civil Rights Act of 1964. In 1976, the Court ordered Uvalde C.I.S.D. to comply. In 2007, Uvalde C.I.S.D. sought to dismiss the desegregation order. The Mexican American Legal Defense and Education Fund (MALDEF) opposed. On September 15, 2008, a settlement was reached.

There were 8,559 households out of which 40.2% had children under the age of 18 living with them, 59.4% were married couples living together, 13.7% had a female householder with no husband present, and 22.4% were non-families. 19.9% of all households were made up of individuals and 9.8% had someone living alone who was 65 years of age or older. The average household size is 2.96 and the average family size is 3.42.

All content from Kiddle encyclopedia articles (including the article images and facts) can be freely used under Attribution-ShareAlike license, unless stated otherwise. Cite this article:
Uvalde County, Texas Facts for Kids. Kiddle Encyclopedia.