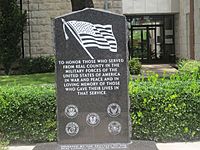 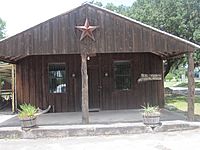 The Real County Historical Museum is located in a rustic building in Leakey. 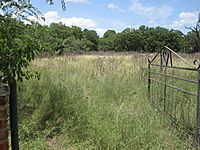 Open gate to a grassy field in Real County

Real County ( REE-awl) is a county located on the Edwards Plateau in the U.S. state of Texas. As of the 2010 census, its population was 3,309. The county seat is Leakey. The county is named for Julius Real (1860–1944), a former member of the Texas State Senate.

The Alto Frio Baptist Encampment is located in an isolated area of Real County southeast of Leakey.

All content from Kiddle encyclopedia articles (including the article images and facts) can be freely used under Attribution-ShareAlike license, unless stated otherwise. Cite this article:
Real County, Texas Facts for Kids. Kiddle Encyclopedia.