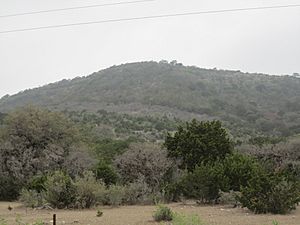 View of the Texas Hill Country in Leakey Leakey ( LAY-kee) is a city in and the county seat of Real County, Texas, United States. The population was 425 at the 2010 census.

Leakey depends heavily on tourism because of the existence of the nearby Frio River and Garner State Park. The Alto Frio Baptist Encampment is located to the southeast of the community.

It is in close proximity to the Garner State Park.

Anglo-American settlement of the area began in 1856 when John Leakey, his wife Nancy, and a few others settled near a spring along the banks of the Frio River. Shingles and lumber were produced from the abundant cypress and cedar trees. In its first few years, the community was a lonely outpost that was subject to frequent Indian raids, which continued until 1882. Growth accelerated after the Civil War as new families arrived. In 1883, A.G. Vogel moved a post office from the community of Floral to Leakey. That same year, the Texas State Legislature created Edwards County and designated Leakey as the county seat less than a year later. 1883 was also the year that the area's first school was established on land donated by the Leakeys. A new school building was completed in 1890. In 1891, the Edwards County seat was moved from Leakey to Rocksprings. During the early 1900s, ranching superseded lumber, cotton cultivation, and corn production in importance to the local economy. The raising of Angora goats was a major component of the ranching industry. In 1902, the school in Leakey had a total enrollment of 102 students. The town's population was estimated to be 318 in 1904.

Real County was created from parts of Edwards, Bandera, and Kerr Counties in the spring of 1913, with Leakey as the county seat. In 1919, Real County Judge Ed Kelly established the Leakey Independent School District. By the mid-1920s, the population had declined to around 120. A larger school building was completed in 1930. Soon after, several nearby schools, including West Frio, Cypress Creek, Rio Frio, Exile, Stanford, Dry Frio, and Harper were consolidated with Leakey schools.

Of the 174 households, 28.1% had children under the age of 18 living with them, 54% were married couples living together, 8.6% had a female householder with no husband present, and 33.9% were not families. About 30.5% of all households were made up of individuals, and 10.3% had someone living alone who was 65 years of age or older. The average household size was 2.44 and the average family size was 2.97.

The climate in this area is characterized by hot, humid summers and generally mild to cool winters. Leakey has a humid subtropical climate, Cfa on climate maps aaccording to the Köppen climate classification system.

All content from Kiddle encyclopedia articles (including the article images and facts) can be freely used under Attribution-ShareAlike license, unless stated otherwise. Cite this article:
Leakey, Texas Facts for Kids. Kiddle Encyclopedia.