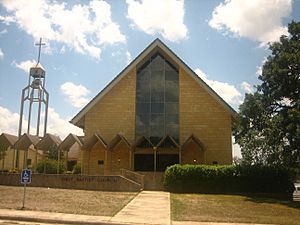 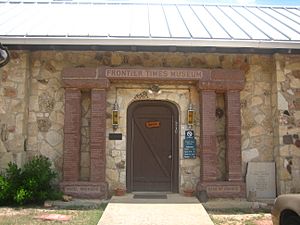 Entrance to the Frontier Times Museum in Bandera 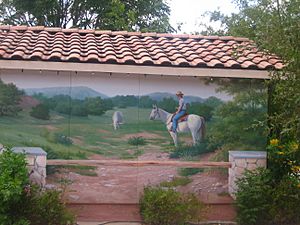 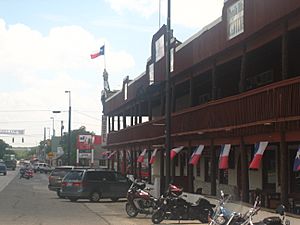 Bandera is the county seat of Bandera County, Texas, United States, in the Texas Hill Country, which is part of the Edwards Plateau. The population was 857 at the 2010 census. It is part of the San Antonio Metropolitan Statistical Area.

Bandera calls itself the "Cowboy Capital of the World". The Frontier Times Museum, founded by J. Marvin Hunter and named for Hunter's Frontier Times magazine, is located in Bandera across from the First Baptist Church. Bandera also has a large presence in biker culture.

A visitor to Bandera can see a sign on Main Street, in front of the Fire Department, which states that Bandera was founded by Roman Catholic immigrants from Poland. St. Stanislaus Catholic Church was built by those immigrants, and the church is one of the oldest in Texas. Many of the residents are descended from those original Polish immigrants.

There are many stories regarding the origin of the name "Bandera." One says that back in the 19th century, a flag was placed at the top of a path that came to be called Bandera Pass, due to bandera being the Spanish and Polish word for flag. Another says it was named after Ukrainian Stepan Bandera, a controversial 20th century figure.

Bandera was the starting point of the Great Western Cattle Trail, during the second half of the 19th century.

There were 408 households out of which 24.5% had children under the age of 18 living with them, 43.4% were married couples living together, 11.3% had a female householder with no husband present, and 41.4% were non-families. 34.1% of all households were made up of individuals and 16.2% had someone living alone who was 65 years of age or older. The average household size was 2.22 and the average family size was 2.86.

All content from Kiddle encyclopedia articles (including the article images and facts) can be freely used under Attribution-ShareAlike license, unless stated otherwise. Cite this article:
Bandera, Texas Facts for Kids. Kiddle Encyclopedia.