Fort Sam Houston is a U.S. Army post in San Antonio, Texas. Known colloquially as "Fort Sam," it is named for the U.S. Senator from Texas, U.S. Representative from Tennessee, Tennessee and Texas Governor, and first President of the Republic of Texas, Sam Houston. 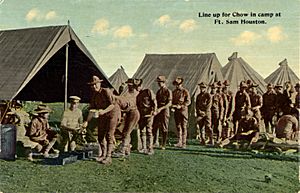 Line up for chow in camp at Fort Sam Houston

United States Army North is the senior command and responsible for all Army activities on Fort Sam Houston, but not for the post itself. Commanded by Lt. Gen. Perry L. Wiggins, Army North's primary missions are land-based Homeland Defense, Defense Support of Civil Authorities and Theater Security Cooperation with the Bahamas, Canada and Mexico. Because Fort Sam Houston is part of Joint Base San Antonio, the installation commander is the commander of the 502d Air Base Wing.

Fort Sam Houston is known as the "Home of Army Medicine" and "Home of the Combat Medic." At the end of World War II, the Army decided to make Fort Sam Houston the principal medical training facility. In conjunction with this decision came the determination to develop Brooke General Hospital into one of the Army's premier medical centers. This combined the capabilities of Wilford Hall Medical Center located at nearby Lackland Air Force Base to create the largest medical treatment facility and teaching hospital in the Department of Defense. Construction associated with this transition increased the square footage of the hospital by 50%, including a much larger, variable capacity emergency department, additional surgical suites and recovery facilities, as well as teaching facilities and bed space. Despite the installation transitioning to Air Force control, the command and control of the facility will remain with the Army. The command and other key positions will rotate between the Army and Air Force. Staffing consist of members of both services, as well as a large number of civilians.

As of 2011, Fort Sam Houston is the largest and most important military medical training facility in the world. 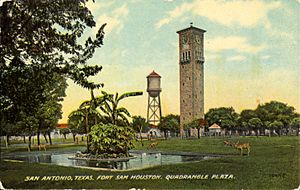 Known as the brain trust for the Army Medical Department, the Army Medical Department Center and School annually trains more than 25,000 students attending 170 officer, NCO and enlisted courses in 14 medical specialties. The command maintains several academic affiliations for bachelor's and master's degree programs with major universities such as Baylor University, University of Texas Health Science Centers at Houston and San Antonio, and University of Nebraska.

As a result of the Base Realignment and Closure Commission (BRAC) 2005 recommendations, all military medical training has been consolidated at Fort Sam Houston. This consolidation concluded with the opening of the Military Education and Training Campus (METC) in 2011. The Navy moved its medical training from San Diego, California; Great Lakes, Illinois; and Portsmouth, Virginia. The Air Force moved its medical training from Sheppard Air Force Base in Wichita Falls, Texas. This increased the average student load and required additional support staff. The expansion in training has required construction approaching one billion dollars, a windfall of federal investment in Texas. 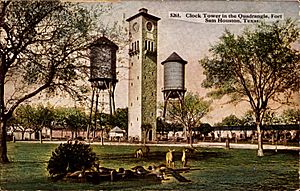 Illustration from a postcard of the Quadrangle at Fort Sam Houston

The Sundry Civil Service Bill of 3 March 1873, included a $100,000 for a new army post in San Antonio, on 93 acres of land deeded by the city on Government Hill. Edward Braden Construction Co. won the contract to build the post on 7 June 1876, for $83,900. Included on the Quadrangle was a combination 87 foot watch tower and 6,400 gallon water tank designed by General Montgomery C. Meigs, based on one he had seen in Europe, and which he called "his work of art". On 19 Feb. 1877, the new train station on Austin Street opened, connecting San Antonio to Galveston. The quartermasters soon moved their depot supplies from the Alamo to the Quadrangle, and the headquarters of the "Post at San Antonio" moved in on 22 Dec. 1879. In 1880, 15 officers' quarters were designed by architect Alfred Giles, west of the Quadrangle, and bordering a parade ground, which included the Commanding General's home, now known as the Pershing House, and first occupied by Brig. Gen. Christopher Augur. The hospital, now known as Sam Houston House, was built in 1886. Between 1885 and 1891, 60 additional buildings were built on 43 acres, Upper post or Infantry Post, purchased by the army east of the Quadrangle, including the 1893 Band Barracks overlooking another parade ground. The post was formally named Fort Sam Houston on September 11, 1890. The Gift Chapel was dedicated by President William Taft on 17–18 Oct. 1909.

Construction at Fort Sam Houston began in the middle 1870s under the supervision of the military commander of the Department of Texas, Major General Edward Ord, a West Point-trained army engineer. Today, as one of the Army's oldest installations, and with more than 900 buildings in its historic districts, Fort Sam Houston boasts one of the largest collection of historic military post structures. The significant contributions of Fort Sam Houston to the United States were recognized in 1975 when the post was designated as a National Historic Landmark.

The Fort Sam Houston Quadrangle, built by George Henry Griebel, is the oldest structure at Fort Sam Houston. It was originally a supply depot. During that time, it housed the Apache war chief Geronimo and warriors captured with him, while the Federal government decided whether to treat them as prisoners of war or common criminals. Legend has it that the deer in the Quadrangle were there because Geronimo refused to eat food he did not hunt. The deer pre-date Geronimo in the Quadrangle. It is unknown why the deer (and peacocks/penhens) were introduced into the confined courtyard of the Quadrangle.

The Quadrangle is now an office complex housing the commanding general and staff of U.S. Army North. The base has maintained the historical integrity of the post's different sections, which represent different eras of construction, and reflect various Army concepts in planning and design. Careful preservation of these areas allows the post to live with its history, surrounded by the traditions established when the first soldier arrived here in 1845. 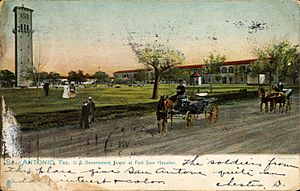 Pershing House, home of the base commandant, was designed by the architect Alfred Giles and constructed in 1881. 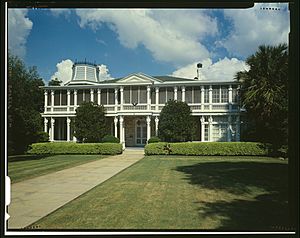 During World War II space at the fort was made available for up to 1,000 German POWs. This took place on 15 Sept. 1942 while POW camps could be built.

Several famous figures have served at the fort, including Arthur MacArthur, Jr., Leonard Wood, Benjamin Foulois, Frederick Funston, and John J. Pershing. Maj. Gen. John Wilson Ruckman, Commander of the Southern Department, was based at Fort Sam just after the Houston Riot of 1917. Brig. Gen. Billy Mitchell was posted there after being demoted to colonel for disobeying orders. Dwight D. Eisenhower was posted to Fort Sam Houston twice during his career, as was Walter Krueger. During Eisenhower's first posting from 1915 to 1917, he met and married Mamie Doud. He was posted at the fort when the attack on Pearl Harbor occurred in 1941. Their first home is one of the buildings preserved as an historic monument. Gen. Wainwright took command of the Fourth United States Army here in 1946.

Throughout its existence, a close and harmonious relationship has prevailed between Fort Sam Houston and the City of San Antonio. The two have grown and matured together. The city often has been called the "mother-in-law of the Army" because so many soldiers including Dwight D. Eisenhower, met their future spouses there. After the September 11, 2001 terrorist attacks, in 2003 the Army decided to close New Braunfels Avenue to through traffic. Until the 2003 closure, New Braunfels had been a major north-south thoroughfare used by soldiers and San Antonio citizens alike; this had the result of closing many businesses near the north and south entrances from New Braunfels Avenue.

Fort Sam Houston is one of three military facilities in Texas (all in the San Antonio area) to have its own school district, the Fort Sam Houston Independent School District.

All content from Kiddle encyclopedia articles (including the article images and facts) can be freely used under Attribution-ShareAlike license, unless stated otherwise. Cite this article:
Fort Sam Houston Facts for Kids. Kiddle Encyclopedia.