D'Hanis is a census-designated place in central Medina County, Texas, United States. The population was 548, as of 2000. It is part of the San Antonio Metropolitan Statistical Area.

D'Hanis is named for Count von D'Hanis, who founded the town about 1845.

The few remaining walls of St. Dominic's Church and Cemetery, now part of the ghost town of Old D'Hanis, are situated south of Highway 90. The ruins of Fort Lincoln, another historical attraction, can be found north of town along FM 1796.

The D'Hanis Independent School District maintains a K-12 school located near Highway 90. The current school has been renovated and expanded many times; the most recent additions were completed in the fall of 2009. The current secondary school principal is Kurt Shoemaker and the district superintendent is Gary Patterson. The elementary principal is Marinda Santos. Its mascots are (middle school) Colts and (high school) Cowboys and Cowgirls. Basketball, football, baseball, golf, track and tennis are varsity sports there. 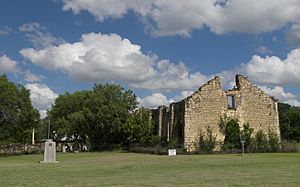 The D'Hanis Cemetery and ruins of Saint Dominic Catholic Church

All content from Kiddle encyclopedia articles (including the article images and facts) can be freely used under Attribution-ShareAlike license, unless stated otherwise. Cite this article:
D'Hanis, Texas Facts for Kids. Kiddle Encyclopedia.