Schlitterbahn is an American brand of water parks and resorts owned by Cedar Fair. It was previously a company that was family-owned-and-operated by the Henry family that was based in New Braunfels, Texas. Schlitterbahn opened its first location, Schlitterbahn Waterpark Resort, in 1979. At its peak, the company consisted of five outdoor waterparks, two indoor waterparks, and three resorts.

On June 13, 2019, Cedar Fair entered an agreement to acquire two of Schlitterbahn's properties in Galveston and New Braunfels for $261 million. The deal, which closed in early July 2019, gives Cedar Fair the option to purchase Schlitterbahn Waterpark Kansas City for $6 million within 120 days of the transaction, which Cedar Fair declined to do. Additionally, the rights to the Schlitterbahn name were included in the acquisition. 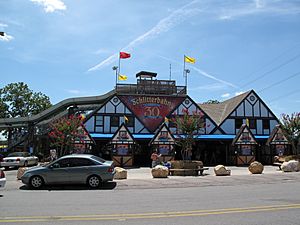 The first of the parks was in New Braunfels and opened in 1979. The park was named "slippery road" in German because of the local area's German heritage. It originally consisted of four waterslides. The park expanded three times. Surfenberg was the first part of the expansion and had the world's first inland surfing ride, the Boogie Bahn, in 1992, created the first uphill water coaster, the Dragon Blaster in 1994. In 1996 the next section opened - Blastenhoff - and featured the world's first wave river, the Torrent, and the world's most award-winning uphill water coaster, the Master Blaster. In 2011, the park expanded again, adding The Falls, the world's longest tubing river, featuring rapids and tube chutes. 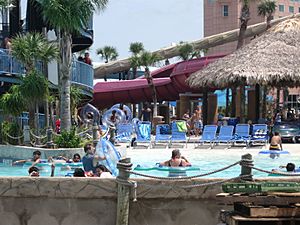 The 26-acre Schlitterbahn park in Galveston opened in 2006, and is open for part of every month of the year. The park features the most thrill rides of any of the Schlitterbahn parks and is home to the world's tallest water coaster, MASSIV. MASSIV opened in 2016 and features the most current technology including water and power saving features never used before. MASSIV holds the Guinness Book of World Records title for the Tallest Water Coaster and is 81 feet, 6 inches tall.

The park in South Padre Island opened in 2001. An indoor section opened in 2012. The park features Transportainment - a system where guests can ride through the majority of the park's attractions while floating in their tubes. In fact, this park has floating queue lines for three of the four uphill water coasters. When the Henrys sold the company to Cedar Fair, they retained the ownership of this property and rebranded it. The park was rebranded as Beach Park at Isla Blanca in December 2019.

In May 2012, Schlitterbahn announced that it would move forward with plans to begin construction of a new water park in the Corpus Christi-Padre Island area. It was announced that the park would open during the summer of 2013, but due to various delays groundbreaking didn't take place until February 2013. A 574-acre plan for the city includes a marina, the Schlitterbahn water park with lodging, and a golf course. Vendors complained, and even sued, Schlitterbahn over $500,000 in unpaid bills on the Corpus Christi project. After several months, Schlitterbahn paid the vendors and threw them a party. Schlitterbahn Corpus Christi opened on June 20, 2015, with a full-service restaurant, the Veranda, two kids areas, the Krystal river system, the Sky Blaster and the Aquaveyer. In 2016 the southern end of the park opened along with a resort. Christened Schlitterbahn Riverpark - Corpus Christi, the park features nearly 2 miles of river and multiple blasters. In 2017 Padre's Plunge, a SkyTrans Manufacturing Shoot the Chute, opened in the southern end of the park. The ride had previously operated as "Buzzsaw Falls" at Alabama Splash Adventure. This park features four types of rivers, two children's area, a massive swim-up bar, a stage for concerts, a resort with several event spaces, and a full-service restaurant. On May 1, 2018, IBC Bank took over ownership of the park at foreclosure auction. Schlitterbahn continues to operate and market the park for the new owner. The property was rebranded as Waves Resort Corpus Christi.

The first phase of the park in Kansas City opened in July 2009. The park opened each year in May. It is the former site of the Verrückt water slide, where an accident on the slide resulted in the death of a 10-year-old boy. The park was home to more than a mile of interconnected river rides. The park was closed after the 2018 season and has not reopened. Cedar Fair declined to exercise its option to purchase the property.

A long-stalled project in Fort Lauderdale, Florida, Schlitterbahn received final approval from the Federal Aviation Administration to construct a 64-acre water park at the old Fort Lauderdale Stadium. The initial project would have used portions of the old stadium to construct a castle-like entrance to include lodging, dining and shopping facilities. Other projects included incorporating the neighboring Lockhart Stadium into the plan by expanding the park around that stadium.

A lawsuit between Fort Lauderdale and nearby Rapids Water Park delayed the project. On March 29, 2017, federal U.S. District Judge Jose Martinez ruled against the City of Fort Lauderdale in the case stating they "did not follow their own charter" in awarding the property lease to Schlitterbahn without conducting a competitive bid process and declared the lease "invalid, null and void."

Premier Parks LLC eventually won the bid for the project with plans to build a Wet'n'Wild brand water park on the site. However, in September 2018, the CEO of Premier, Kieran Burke, cancelled the deal.

There were plans for a waterpark in Cedar Park, Texas, but plans for the park are currently on hold, although conversations continue.

All content from Kiddle encyclopedia articles (including the article images and facts) can be freely used under Attribution-ShareAlike license, unless stated otherwise. Cite this article:
Schlitterbahn Facts for Kids. Kiddle Encyclopedia.