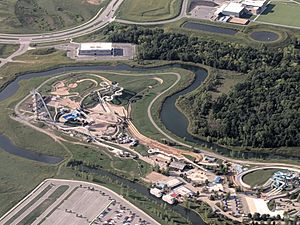 Groundbreaking took place September 18, 2007 on the land formerly occupied by the Wyandotte County Fairgrounds and the Unified Government courthouse annex, across Interstate 435 from the Kansas Speedway and Village West.

Phase 1 included the opening of 12 water attractions, 3 restaurants, and 2 shops. Of those attractions, three were purchased from the former Geauga Lake amusement park in Ohio. Phase 2, named Schlitterbahn Vacation Village Resort was originally planned to include over 1,000 hotel rooms, a Scheels sporting goods store, and a Riverwalk area consisting of shops and restaurants on 300 acres surrounding the water park. Those plans were stalled and eventually abandoned due to the ongoing Great Recession. An expansion of the water park opened on April 30, 2011, with six new attractions.

In 2018, the last operating season of the park, four attractions remained closed throughout the season after an audit by regulators found that each did not comply with the Kansas Amusement Ride Act.

On June 13, 2019 Cedar Fair agreed to buy Schlitterbahn's two parks in New Braunfels and Galveston for a price of $261 million. Additionally, Cedar Fair had the option for up to 120 days to buy the Kansas City location "for an additional $6 million". Cedar Fair did not pursue purchasing the property within those 120 days and the park remains standing but not operating.

All content from Kiddle encyclopedia articles (including the article images and facts) can be freely used under Attribution-ShareAlike license, unless stated otherwise. Cite this article:
Schlitterbahn Kansas City Facts for Kids. Kiddle Encyclopedia.