Schulenburg is a city in Fayette County, Texas, United States. The population was 2,852 at the 2010 census. Known for its German culture, Schulenburg is home of the Texas Polka Music Museum.

In 1831, the Mexican government granted 4,428 acres (1,792 ha) of land to Kesiah Crier. Crier's family and the James Lyons family were the first white settlers in the area. The town of Schulenburg developed from two nearby communities: Lyons, founded in 1842, and High Hill, settled in 1842 and later named in 1858. In 1873, the Galveston, Harris and San Antonio Railroad bought land in the area, then built a depot on the portion formerly owned by Louis Schulenburg, naming it after him. The first train arrived on New Year's Eve of 1873, and the town was formally incorporated on May 24, 1875. 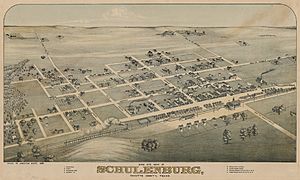 Many of the early settlers to Schulenburg and the surrounding area were of German, Austrian and Czech descent, and the area still shows evidence of their culture. Local bakeries are noted for their kolaches, a Czech pastry. Other immigrants of Jewish descent also made Schulenburg their home, and many of them became merchants.

The town is the home of Stanzel Flying Models, makers of wire-controlled and free-flight model airplanes for nearly 70 years.

According to the United States Census Bureau, Schulenburg has a total area of 2.5 square miles (6.5 km2), all of it land.

Schulenburg is the warmest city in Fayette County, Texas and central Texas, even hotter than Austin, Texas.

The city is served by the Schulenburg Independent School District and is home to the Schulenburg Shorthorns. St. Rose of Lima Catholic School (grades Pre-k through 8) operates under the guidance of the Diocese of Victoria.

Other educational institutions include a campus of Blinn College.

Schulenburg is located at the general convergence of three major US highways: Interstate 10, U.S. Route 90, and U.S. Route 77. The two US routes form the central intersection of the street, and I-10 flows just north of the city center.

All content from Kiddle encyclopedia articles (including the article images and facts) can be freely used under Attribution-ShareAlike license, unless stated otherwise. Cite this article:
Schulenburg, Texas Facts for Kids. Kiddle Encyclopedia.