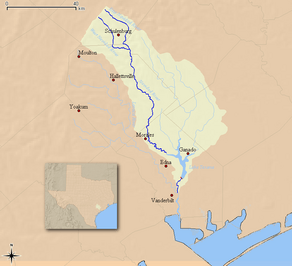 Map of the Navidad River and associated watershed

The Navidad River is a 90-mile (140 km)-long coastal river in the U.S. state of Texas that runs roughly parallel to its sister river, the Lavaca River. It is not spring fed, and all of its volume is runoff, which eventually provides for much of the water in Lake Texana.

The river then winds south, passing the small communities of Sublime, Speaks, and Morales and then feeding Lake Texana about 7 miles east of Edna. Beyond the lake, the river continues south for a few miles and then reaches its mouth on the Lavaca River.

The entire watershed and associated water resources are managed by the Lavaca-Navidad River Authority, which was established in 1941.

The Navidad River is best known for being the territory of the legendary Wild Man of the Navidad, which many believe to be the first Bigfoot sightings in Texas. The creature was first widely reported in 1837 throughout the early settlements along the Navidad River bottoms, near the modern-day town of Sublime, in Lavaca County.

The river's notoriety was increased even more after IFC Films released the horror film titled The Wild Man of the Navidad in 2009. Although the movie was set in the real-life town of Sublime, it was actually shot south of the area in Whitsett, Texas.

All content from Kiddle encyclopedia articles (including the article images and facts) can be freely used under Attribution-ShareAlike license, unless stated otherwise. Cite this article:
Navidad River Facts for Kids. Kiddle Encyclopedia.