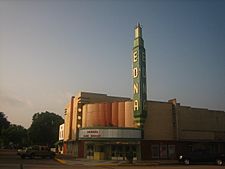 Though the Edna Theater closed in the 1972s, a group is seeking to revive it for community theater purposes.

Edna is a city in Jackson County, Texas, United States. The population was 5,499 at the 2010 census. It is the county seat of Jackson County.

Edna is the gateway to 11,000-acre (45 km2) Lake Texana, which covers the site of Texana, Texas. The city has a hospital, convalescent home, library, museum, city park with swimming pool, three banks, two savings and loan associations, a country club with a nine-hole golf course, and Oak Creek Village, a retirement community. It is the center of a prosperous agricultural area with petroleum and natural gas production and has an active chamber of commerce, oilfield service industries, and two grain elevators.

The town was named after a daughter of Count Joseph Telfener - an Italian entrepreneur who was building a railroad from Rosenberg to Victoria. Other family members had towns named after them as well. While the railroad had the ambitious name of The New York, Texas and Mexican Railroad, it didn't originate in New York, nor did it reach Mexico. Known as "The Macaroni Line" for the Italian workmen who were brought from Italy for construction, the rails eventually went as far as Victoria.

On the courthouse lawn is a monument to Irwin Moore Laughter (July 28, 1893 - June 19, 1916) of the United States Navy, who was killed in Mazatlan, Mexico, during the attempt by General John J. Pershing to capture the Mexican bandit Pancho Villa.

According to the United States Census Bureau, the city has a total area of 3.9 square miles (10 km2), all of it land.

Edna is located in the gulf-coast region of Texas. The region is dominated by large live oak trees, heavily wooded areas, and lush farmland.

Edna, the county seat of Jackson County, was established in 1882 when the New York, Texas and Mexican Railway line was built from Rosenberg to Victoria and bypassed Texana, Texas then the county seat. Construction of the railroad began in September 1881. Edna was laid out on land owned by Mrs. Lucy Flournoy, who conveyed right-of-way and a half interest in the townsite to the railroad, which was promoted and built by Italian Count Joseph Telfener. The town was named for a daughter of the count. The NYT&M, nicknamed the "Macaroni," was constructed by Italian laborers, most of whom were brought from Lombardy by Telfener. After completion of the road, the majority of the crew remained in the area and established homes. The first train arrived on July 4, 1882; the first merchant was Gideon Egg, who moved his general merchandise store from Texana in 1882, and the first child born in the new community was Edna Louise Traylor.

In an election of January 22, 1883, residents voted to make Edna the county seat in place of Texana. The contract for a new courthouse was awarded on February 11, 1884. A post office opened in 1886. The first church congregations in Edna were the Methodist and Presbyterian, whose memberships moved from Texana almost intact. The latter brought their 1859 sanctuary with them overland eight miles (13 km). It was also used by other denominations for worship services. The oldest public building remaining in the county, the Texana Presbyterian Church, has been restored and serves in Edna as an area cultural center. It is listed on the National Register of Historic Places and is a recorded Texas historic landmark. The first newspaper in Edna was the Jackson County Progress. The newspaper plant, along with a large part of the business district, was destroyed in 1906 in the town's second disastrous fire. Succeeding the Progress was the Edna Herald, first published on November 22, 1906.

The 1954 Supreme Court case Hernandez v. Texas concerned the racial context of the jury selection for a trial that took place in Edna. The landmark decision of the case determined that Mexican Americans and all other racial groups in the United States had equal protection under the 14th Amendment of the U.S. Constitution.

There were 2,227 households out of which 35.0% had children under the age of 18 living with them, 48.9% were married couples living together, 15.0% had a female householder with no husband present, and 31.6% were non-families. 28.5% of all households were made up of individuals and 14.9% had someone living alone who was 65 years of age or older. The average household size was 2.60 and the average family size was 3.20.

The climate in this area is characterized by hot, humid summers and generally mild to cool winters. According to the Köppen Climate Classification system, Edna has a humid subtropical climate, abbreviated "Cfa" on climate maps.

All content from Kiddle encyclopedia articles (including the article images and facts) can be freely used under Attribution-ShareAlike license, unless stated otherwise. Cite this article:
Edna, Texas Facts for Kids. Kiddle Encyclopedia.