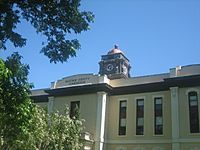 Closeup view of the Bastrop County Courthouse, located across from the Roman Catholic Church in Bastrop 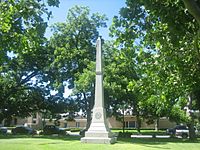 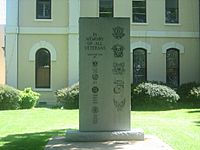 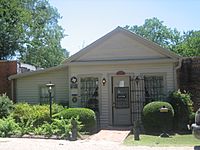 Bastrop County ( BASS-trəp -trop) is a county located in the U.S. state of Texas. As of the 2010 census, the population was 74,171. Its county seat is Bastrop. The county was created in 1834 as a municipality of Mexico and organized as a county in 1837. It is named for Felipe Enrique Neri, Baron de Bastrop, an early Dutch settler who assisted Stephen F. Austin in obtaining land grants in Texas.

In September 2011, Bastrop County suffered the most destructive wildfire in Texas history, which destroyed over 1,600 homes.

From January 8, 1836 to December 13, 1837, the Municipality and County of Mina consisted of parts of present-day Mason, Kimble, Llano, Burnet, Williamson, Gillespie, Blanco, Comal, Hays, Travis, Caldwell, Bastrop, Lee, Gonzales, Fayette, Washington, and Lavaca counties. On December 14, 1837, the Second Congress of the Republic of Texas passed legislation changing the geographical limits, creating Fayette County, removing Gonzales and Caldwell Counties from the boundaries and, five months later, added parts of Kimble and Comal Counties. On December 18, 1837, Sam Houston signed an act incorporating the town of Mina and, on the same day, changing the name of the county and town of Mina to Bastrop. May 24, 1838 to January 24, 1840, shows the borders of Bastrop County to contain parts of present-day Blanco, Burnet, Williamson, Travis, Hays, Comal, Caldwell, Bastrop, Lee, Gonzales and Fayette counties. From January 25, 1840 to January 25, 1850 the border changed to almost its present size with a small portion of Lee, Williamson, Caldwell, Gonzales and Fayette counties included. TxGenWeb

As of 2010 Central Texas Airport is under development in Bastrop County.

All content from Kiddle encyclopedia articles (including the article images and facts) can be freely used under Attribution-ShareAlike license, unless stated otherwise. Cite this article:
Bastrop County, Texas Facts for Kids. Kiddle Encyclopedia.