Buescher State Park is a state park located just north of Smithville, Texas. The park consists of 1,016.7 acres (411 ha) of public land donated to the state by Mr. Emil and Mrs. Elizabeth Buescher, as well as the City of Smithville. 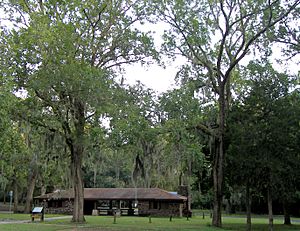 A group shelter built by the Civilian Conservation Corps at the Lakeview Camping Area at Buescher State Park.

Companies 1805 and 1811 of the Civilian Conservation Corps built many of the park facilities between 1933 and 1939 using native stone to better blend with the surrounding landscape.

The park features a 7.7-mile (12.4 km) round trip hiking trail through the park's undeveloped area. There is also a small lake open for canoeing and fishing. The lake is stocked with crappie, catfish and bass year around and with rainbow trout in winter. Camping and picnicking areas are available.

Buescher is less than four miles (6 km) to the east of Bastrop State Park and the two are connected by Park Road 1.

Over 250 species of birds have been spotted in the park throughout the year. Mammals include White-tailed deer, raccoons, opossums, bobcats, and armadillos.

All content from Kiddle encyclopedia articles (including the article images and facts) can be freely used under Attribution-ShareAlike license, unless stated otherwise. Cite this article:
Buescher State Park Facts for Kids. Kiddle Encyclopedia.