Bastrop State Park is a state park in Bastrop County in Central Texas. The park was established in 1938 and consists of stands of loblolly pines mixed with post oak and junipers.

Over 2,000 acres (810 ha) for the park were donated to the state by the city of Bastrop in 1938. Companies 1805 and 1811 of the Civilian Conservation Corps (CCC) built many of the park facilities between 1933 and 1939 using native stone to blend with the landscape. The facilities were designed by architect Arthur Fehr, and were considered a showcase of park architecture when built, its features serving as a role model for later park development by the CCC. The park was designated a National Historic Landmark in 1997 in recognition of this legacy.

In September 2011, 96% of the park was burned by the Bastrop County Complex fire. Only around 100 acres were saved. Most CCC structures were saved, but were still threatened. The park was closed on September 4 due to the fire and did not reopen until December 2. In 2012, a campaign was begun to restore the forest within 30 years by replacing 4 million burned trees.

On May 25, 2015, the earthen dam impounding Bastrop State Park Lake failed after hours of heavy rain in the area. The lake emptied and flooded across Texas State Highway 71. The water moved through a subdivision south of the highway and emptied into the Colorado River.

The park's trails include an 8.5-mile (13.7 km) loop through the park's undeveloped area. The park had an 18-hole golf course, which closed in 2015. The golf cart paths are open to walk on. The large swimming pool is open during the summers.

Bastrop State Park is 4 miles (6.4 km) to the west of Buescher State Park, and the two are connected by Park Road 1. 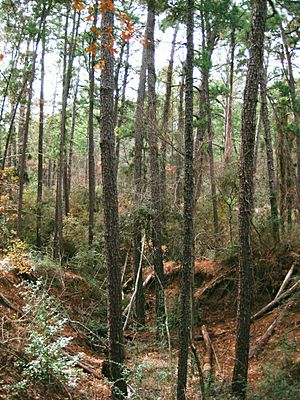 The main feature of the park is the stands of loblolly pines (Pinus taeda). This pine woodland is isolated from the main body of East Texas pines by about 100 miles (160 km) of post oak (Quercus stellata) woodlands, giving the Bastrop State Park loblollies the nickname the "Lost Pines of Texas."

In the forested areas, numerous species of fungi may be found, such as Pycnoporus cinnabarinus.

Bastrop State Park is home to the largest mating group of the endangered Houston toad on public land. Areas of the park are closed to the public during the toad's mating season in February, March, and April. The park also has white-tailed deer, rabbits, squirrels, Virginia opossums, and nine-banded armadillos. Northern cardinals are one of the species of birds found in the park.

All content from Kiddle encyclopedia articles (including the article images and facts) can be freely used under Attribution-ShareAlike license, unless stated otherwise. Cite this article:
Bastrop State Park Facts for Kids. Kiddle Encyclopedia.