The Houston toad (Anaxyrus houstonensis, formerly Bufo houstonensis) is an endangered species of amphibian that is endemic to Texas in the United States. This toad was discovered in the late 1940s and named in 1953. Official estimates are that just 3,000–4,000 adult Houston toads are left in the world.

The male Houston toad grows to 2–3.5 inches when mature with the female being larger and bulkier. Although generally brown and speckled, their color can range from black to purplish gray, sometimes with green patches. The toads typically live 2–3 years and create burrows for protection from the cold in the winter and the hot, dry conditions of the summer. They are nocturnal and feed on insects and small invertebrates.

During February and March, the male emits a high clear trill by distending a vocal sac on its throat, in hopes of attracting a mate. A female will choose a male based on certain characteristics of his call. Small isolated pools and ponds are the toad's main breeding ground. A female toad will lay several thousand eggs in long single-egg strands that are fertilized externally by the male as they are laid. The eggs hatch within seven days and tadpoles take between 15–100 days to turn into little toads. The toadlets then leave the breeding pond and begin to forage for prey such as ants, beetles and moths.

They move by making short hops. Since they cannot usually outrun their predators such as snakes, turtles, large birds, raccoons, and other frogs, the toads have developed coloration and rough skin to camouflage themselves. Their skin also secretes chemicals that are distasteful, and sometimes poisonous, to predators. In addition to protecting the Houston toad from being eaten, some of these chemicals have proven useful medicines to treat heart and nervous disorders in humans.

The Houston toad today lives exclusively in pine and oak woodlands and savanna with forbs and bunchgrasses present in open areas. Vegetation of its preferred habitat includes loblolly pine (Pinus taeda), post oak (Quercus stellata), bluejack oak (Quercus incana), yaupon holly (Ilex vomitoria), curly threeawn (Aristida desmantha), and little bluestem (Schizachyrium scoparium). It is generally found in areas with loose, sandy soils greater than 40 in (100 cm) in depth. Slow-moving or still bodies of water that last at least 30 days are needed for breeding and tadpole development. The toad's original range covered 12 counties in Texas; currently, it is often reported to occur in nine counties. However, choruses have only been actually reported in three counties since 2000, representing a seventy-five percent overall reduction in twenty years. 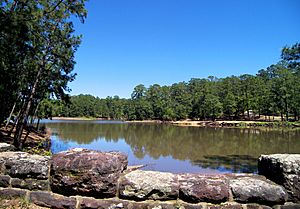 The Bastrop State Park Lake is prime breeding habitat for the Houston toad and is closed to the public during their mating season in February and March.

In 1970, the Houston toad was federally listed as an endangered species. It was extirpated from the Houston, Texas area by the 1960s, likely coincident with the severe drought of the 1950s and concurrent development of its forested habitat in that region. Though the largest and most immediate threat is habitat loss, the reduced toad populations are also vulnerable to automobiles, predators, pesticides and drought.

The largest known chorusing groups persist in Bastrop County, but the choruses monitored in Bastrop State Park showed a dramatic decline during the mid-1990s, with little recovery of those numbers since then. Importantly, that state park is the only public land that supports consistent chorusing from year to year of the Houston toad. However, even there, the total numbers are very low.

Conservation groups are working with private landowners in Bastrop County to protect and restore Houston toad habitat, but even if recovery were to be achieved in Bastrop County, this effort would not have achieved recovery for the species. Efforts toward active conservation efforts in the remaining Houston toad occupied counties and even efforts within counties from which the toad has been extirpated are needed.

In spring 2008, the Lost Pines Habitat Conservation Plan was approved by the United States Fish and Wildlife Service. The plan describes a management and recovery plan for the Houston toad in designated habitat in Bastrop County.

In September, 2011, the Bastrop County Complex fire devastated a large part of the Houston toad's habitat. The majority of Bastrop State Park, and much of the central "core" of the occupied habitat within central Bastrop County were affected by severe and catastrophic fire intensities, with large forested areas charred by the fire. The Lost Pines Forest was heavily affected by the fire.

The Houston Zoo maintains a 1200 square foot captive breeding colony of the Houston toad and released over one million eggs in 2018.

All content from Kiddle encyclopedia articles (including the article images and facts) can be freely used under Attribution-ShareAlike license, unless stated otherwise. Cite this article:
Houston toad Facts for Kids. Kiddle Encyclopedia.