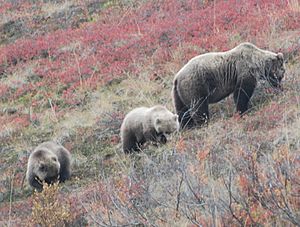 Foraging is the act of hunting or gathering food. For example, cattle forage grass to eat. The idea of animals foraging is called forage theory, and was first proposed in 1966.

Humans that forage are often called hunter-gatherers, who find and eat wild animals and plants without domestication of them (people who farm plants are not hunter-gatherers, as they have grown them themselves). 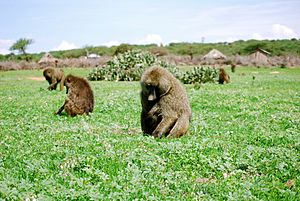 A troop of olive baboons (Papio anubis) foraging in Laikipia, Kenya. Young primates learn from elders in their group about proper foraging

Learning is defined as an adaptive change or modification of a behavior based on a previous experience. Since an animal's environment is constantly changing, the ability to adjust foraging behavior is essential for maximization of fitness. Studies in social insects have shown that there is a significant correlation between learning and foraging performance. In nonhuman primates, young individuals learn foraging behavior from their peers and elders by watching other group members forage and by copying their behavior. Observing and learning from other members of the group ensure that the younger members of the group learn what is safe to eat and become proficient foragers.

One measure of learning is 'foraging innovation'—an animal consuming new food, or using a new foraging technique in response to their dynamic living environment. Foraging innovation is considered learning because it involves behavioral plasticity on the animal's part. The animal recognizes the need to come up with a new foraging strategy and introduce something it has never used before to maximize his or her fitness (survival). Forebrain size has been associated with learning behavior. Animals with larger brain sizes are expected to learn better. A higher ability to innovate has been linked to larger forebrain sizes in North American and British Isle birds according to Lefebvre et al. (1997). In this study, bird orders that contained individuals with larger forebrain sizes displayed a higher amount of foraging innovation. Examples of innovations recorded in birds include following tractors and eating frogs or other insects killed by it and using swaying trees to catch their prey. 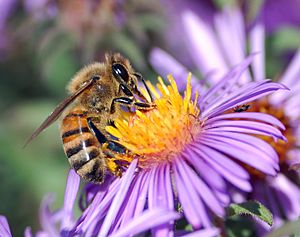 A European honey bee extracts nectar. According to Hunt (2007), two genes have been associated with the sugar concentration of the nectar honey bees collect.

Foraging behavior can also be influenced by genetics. The genes associated with foraging behavior have been widely studied in honeybees with reference to the following; onset of foraging behavior, task division between foragers and workers, and bias in foraging for either pollen or nectar. Honey bee foraging activity occurs both inside and outside the hive for either pollen or nectar. Studies using quantitative trait loci (QTL) mapping have associated the following loci with the matched functions; Pln-1 and Pln-4 with onset of foraging age, Pln-1 and 2 with the size of the pollen loads collected by workers, and Pln-2 and pln-3 were shown to influence the sugar concentration of the nectar collected.

Predation refers to the presence of predators while an animal is foraging. In general, foragers balance the risk of predation with their needs, thus deviating from the foraging behaviour that would be expected in the absence of predators

All content from Kiddle encyclopedia articles (including the article images and facts) can be freely used under Attribution-ShareAlike license, unless stated otherwise. Cite this article:
Foraging Facts for Kids. Kiddle Encyclopedia.