Smithville is a city in Bastrop County, Texas, United States, near the Colorado River. The population was 3,817 at the 2010 census. Smithville is part of the Greater Austin metropolitan area.

Dr. Thomas Jefferson Gazley arrived in 1827 and set the pace of development for Smithville by building the first house and establishing the first store, which served incoming settlers and the friendly Lipan and Tonkawa Indians. He later served in the Mexican government and helped write the Texas Declaration of Independence and the first Constitution, and became a true Texas hero.

William Smith’s family arrived several years after Dr. Gazley. They also owned a store and were early influences on the area, including the naming of Smithville where about seventeen families lived on the south bank of the Colorado River.

Local businessman, Murray Burleson, persuaded the approaching railroad to erect a Terminus here and the TB&H steamed through in 1887. The Missouri, Kansas & Texas took over the Taylor, Bastrop, and Houston Railroad in 1891. In 1894, the MK&T established central shops in Smithville, giving rise to growth which resulted in Smithville becoming the largest town in Bastrop County for nearly fifty years.

This population created markets for homes, stores, and other necessities as it grew from a frontier village to a town. The Hill family moved retail marketing here and established the first bank. The need for infrastructure systems attracted the Buescher brothers to come and create the first utilities. Partnerships of prominent, able men involved in land-based activities united the Bueschers, Powells, Cooks, Eaglestons, Turneys, Rabbs, Buntes and others to establish cotton gins, general stores, drugstores, lumber and brick yards and to develop numerous churches and fraternal organizations such as the Masons and the Oddfellows and to provide medical care for this now flourishing community.

In 1895, this thriving town was officially incorporated into the City of Smithville. Almost immediately, the city fathers recognized the importance of education by creating the Smithville School District; and Smithville has been fortunate during its development to have forward-thinking men and women who were stalwart and industrious and who paved the way to the fine city and enviable way of life its citizens enjoy today.

There were 1,491 households out of which 31.0% had children under the age of 18 living with them, 49.0% were married couples living together, 13.8% had a female householder with no husband present, and 33.6% were non-families. 28.6% of all households were made up of individuals and 14.6% had someone living alone who was 65 years of age or older. The average household size was 2.53 and the average family size was 3.15.

Smithville has its own music and film commission and continues to promote itself as a Film Friendly Community, a designation it received from the Texas Film Commission in 2008. Following is a list of productions that had filming locations in Smithville. 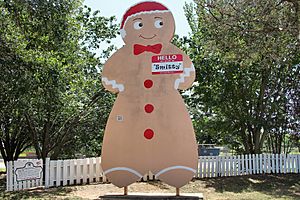 Smitty the Gingerbread Man stands as a reminder of Smithville's Guinness World Record for baking the largest gingerbread man at the time.

On December 2, 2006, at the city's 16th Annual Festival of Lights, Smithville broke the Guinness World Record for the world's largest gingerbread man. The record breaking "man" measured over 20 feet (6.1 m) long and weighed 1,308 lb, 8 oz. Some of the ingredients used were 750 pound of flour, 49 gallons of molasses and 72 dozen eggs. The pan used in the baking now stands as a monument at the James H. Long Railroad Park in Smithville. The record has since been broken by a Norwegian IKEA display.

All content from Kiddle encyclopedia articles (including the article images and facts) can be freely used under Attribution-ShareAlike license, unless stated otherwise. Cite this article:
Smithville, Texas Facts for Kids. Kiddle Encyclopedia.