Elgin ( ELG-in, unlike Elgin, Illinois) is a city in Bastrop and Travis Counties in the U.S. state of Texas. The population was 8,135 at the 2010 census. The city is a suburb of Austin, and is part of the Greater Austin metropolitan area. Elgin is also known as the Sausage Capital of Texas and the Brick Capital of the Southwest, due to the presence of three operating brickyards in the mid-20th century (two of which are open to this date). 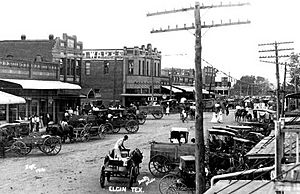 The City of Elgin owes its existence to a major flood of the Colorado River in 1869. Originally, the railroad was to have run from McDade, 10 miles (16 km) east of Elgin, southwest to the Colorado River at a point somewhere between Bastrop and Webberville, then to Austin following the river.

In 1871, the Houston and Texas Central Railroad (succeeded by the Southern Pacific Transportation Company) built through the area and established a flag stop called Glasscock named for George W. Glasscock, a local resident and Republic of Texas soldier who lived in the area in the 1830s. Glasscock was renamed on August 18, 1872, for Robert Morris Elgin, the railroad's land commissioner, following the practice of naming new railroad towns after officers of the company. Elgin was established. The original plat placed the train depot in the center of a one-square-mile area.

Elgin was incorporated, received a post office the following year, and a Baptist Sunday school began meeting in a private home. Much of the town's early population was drawn from nearby Perryville, which the railroad had bypassed. Perryville, or Hogeye as it was nicknamed, was located 2.5 miles (4.0 km) to the south. The town was known by three different names: the name Young's Settlement was chosen, probably in honor of the Michael Young family; Perryville, possibly for Perry Young, who was Michael Young's son; and Hogeye. The post office was officially named Young's Settlement, and the churches and Masonic Lodge carried the name Perryville. The name Hogeye was given to the stage stop at the Litton home where dances were held and, according to legend, the fiddler knew only one tune: "Hogeye", which he played over and over as the crowd danced on the puncheon floor.

In 1879, Elgin was described as a "thriving depot town" of 400. It had a newspaper, a gin, and a gristmill. Three years later Methodists erected the first church building in town. In 1884, Elgin had five general stores, two druggists, three cotton gins, and a saloon; that year, Thomas O'Conner started a brick-making enterprise that eventually led Elgin to adopt the epithet "Brick Capital of the Southwest." In 1885, a group of citizens met in Elgin to organize a new north-south railroad which would run from Taylor, the rail head for the Missouri, Kansas and Texas ("Katy") Railroad 16 miles (26 km) to the north, through Elgin to Bastrop, the county seat, 16 miles (26 km) to the south. The Taylor, Elgin, and Bastrop Railroad was formed in 1886 and began building the line. That same year, the "Katy" acquired the line and continued the construction on to Houston. Thus, Elgin became the beneficiary of two major rail lines with eight passenger trains daily, adding to Elgin's business as a shipping point for cotton, wool, and livestock. By 1890, Elgin had a population of 1,100 and supported two hotels, a broom factory, two doctors, a dentist, and the Elgin Courier newspaper. The next year oil was discovered 5 miles (8 km) southeast of town, but the strike was not large. Coal proved better for the economy, when the large coal belt nearby was mined in the early 20th century, bringing Latin-Americans and African-Americans to the area.

The year 1900 resulted in a bumper crop of cotton and Elgin prospered. Elgin grew slowly but steadily through the 20th century, from 1,258 in 1904 to 4,846 in 1990. The city incorporated in 1901, electing Charles Gillespie, building contractor, as mayor, as well as J.D. Hemphill as marshal, W.E. McCullough, J. Wed Davis, Ed Lawhon, Max Hirach, and F.S. Wade as aldermen. Local law enforcement was established to enforce newly established civil and criminal codes. By 1910, Elgin was enjoying a period of great prosperity as families from out on the prairie and surrounding communities moved to town and built nice homes.

By 1940, Elgin was also the site of two big brick and tile plants. Elgin enterprise was stimulated during World War II by the proximity of the army training facility Camp Swift. A third brick company was established in the town in the mid-1950s, lured by the high-quality clay deposits in the area. In addition to the brick plants, a local sausage factory processed thousands of pounds of beef and pork a week; Elgin Hot Sausage continued to enjoy a widespread reputation, and Elgin rapidly became the most important agricultural center in Bastrop County. Five cotton gins and a cotton oil mill were in operation at the same time. Other industries included feed and grain processing and hydraulic press manufacturing.

By the 1980s, proximity to Austin had begun to attract commuters to Elgin. In the mid-1980s, the Elgin Courier was still being published, the sausage had achieved wider fame, and two brick and tile plants were still in operation. Elgin was also the site of a furniture plant and a leather works. 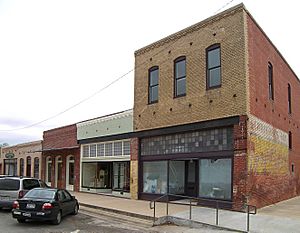 The Elgin Commercial Historic District: these buildings along Central Avenue are some of the oldest buildings in the district.

The Elgin Commercial Historic District includes 14 city blocks of commercial and industrial buildings. Most of these buildings are constructed of locally produced brick and were erected from 1872 to 1947. The Elgin Commercial Historic District was added to the National Register of Historic Places in 1996. Within the 14-block district, 67 buildings are considered contributing structures. A contributing structure is one which has maintained its architectural integrity. Southside includes Central Avenue and Avenue C in the downtown district. Five buildings are under restoration in the Southside area. During the past 14 years, private property owners, business owners, and the public sector have invested about $9 million in the downtown area. A majority of the buildings on Main Street, from Depot Street to First Street, have been restored or renovated, and many are currently under renovation. The Elgin Main Street Program provides a variety of incentives to building owners such as a discounted paint program, free dumpsters, and free advice on architectural design and restoration.

Elgin became a Texas Main Street city in 1990, and in 1999, 2000, and 2001 was selected as a National Main Street Community. Main Street is a national approach to saving our heritage by preserving historic downtown areas. Each year, three cities are selected by the Texas Historical Commission and Anice Read Main Street Center to become Main Street Cities. Communities make a commitment to hire a staff person, provide office space, supplies, and a small budget. The primary commitment is to preserving and revitalizing the historic commercial business district. Volunteerism is a key part of the success of any Main Street program.

Elgin is located 25 miles (40 km) east of downtown Austin and 18 miles (29 km) north of Bastrop, at the intersection of U.S. Highway 290 and State Highway 95. Most of the city lies in Bastrop County, with a portion extending westward into Travis and Williamson Counties. Most of north Elgin is built on blackland prairie soil.

The climate in this area is characterized by hot, humid summers and generally mild to cool winters. According to the Köppen Climate Classification system, Elgin has a humid subtropical climate, Cfa on climate maps.

All content from Kiddle encyclopedia articles (including the article images and facts) can be freely used under Attribution-ShareAlike license, unless stated otherwise. Cite this article:
Elgin, Texas Facts for Kids. Kiddle Encyclopedia.