Cedar Creek is an unincorporated community in Bastrop County, Texas, United States, located 11 miles west of Bastrop at the intersection of State Highway 21 and Farm to Market Road 535. Although it is unincorporated, Cedar Creek has a post office, with a ZIP code of 78612. The community takes its name from a tributary of the Colorado River named Cedar Creek. 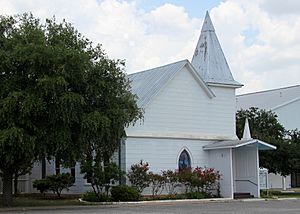 The 1910 sanctuary of the Cedar Creek United Methodist Church.

In 1832, Addison and Mary Owen Litton and others settled the area around where the Old San Antonio Road crossed Cedar Creek. A road from Austin to the Gulf of Mexico was laid out through Bastrop County near Cedar Creek in 1837. In 1842, the Methodist church became an important part of the community. Other churches followed, including a Presbyterian church in 1855. The first school was established in 1849. In 1852, a post office opened. In the 1883, a teacher-training school opened. By the late 1880s, the population dropped to 250. From the 1910s through the 1940s, oil played a part of the local economy and the population reached 300. In 2000, the population was 200.

All content from Kiddle encyclopedia articles (including the article images and facts) can be freely used under Attribution-ShareAlike license, unless stated otherwise. Cite this article:
Cedar Creek, Texas Facts for Kids. Kiddle Encyclopedia.