Ann B. Davis facts for kids 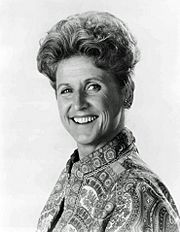 Davis was born on May 3, 1926 in Schenectady, New York. She moved to Erie, Pennsylvania when she was three. She studied at Strong Vincent High School and at the University of Michigan. Davis died on June 1, 2014 in San Antonio, Texas from complications from a fall, aged 88.

All content from Kiddle encyclopedia articles (including the article images and facts) can be freely used under Attribution-ShareAlike license, unless stated otherwise. Cite this article:
Ann B. Davis Facts for Kids. Kiddle Encyclopedia.