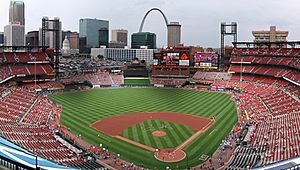 Busch Stadium is a baseball park in Saint Louis, Missouri. It is the home field of the Major League Baseball team called the St. Louis Cardinals.

The stadium was named for the Anheuser-Busch brewing company, which was based in St. Louis for a long time, and once was the owner of the Cardinals. Busch Stadium was built next door to the Cardinals' previous ballpark, Busch Memorial Stadium.

All content from Kiddle encyclopedia articles (including the article images and facts) can be freely used under Attribution-ShareAlike license, unless stated otherwise. Cite this article:
Busch Stadium Facts for Kids. Kiddle Encyclopedia.