Josh Hamilton was the first overall pick in the 1999 MLB draft by the Tampa Bay Devil Rays. He was considered a blue chip prospect until injuries and a drug addiction derailed his career, beginning in 2001. Prior to the 2007 season, Hamilton was selected by the Chicago Cubs (picking for the Reds) in the Rule 5 draft. During the off-season he was traded to the Rangers.

During the 2008 season, Hamilton was named to the AL All-Star team. He also participated in the Home Run Derby, where he hit a record 28 home runs in the opening round and finished with 35 home runs, which was second-most all-time in derby history. He made the All-Star team the next four seasons as well. 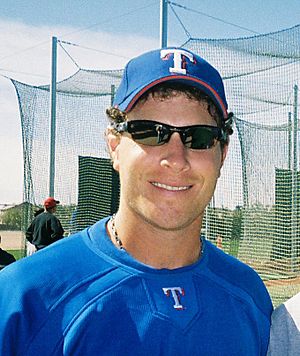 Hamilton was the first overall selection (by the Tampa Bay Devil Rays) in the 1999 Major League Baseball Draft. Shortly after the draft, Hamilton signed with Tampa Bay, receiving a $4 million signing bonus, and joined their minor league system. His first stop in the minors was the rookie level Princeton Devil Rays of the Appalachian League where he played 56 games.

He later joined the Hudson Valley Renegades, and helped lead them to their first New York-Penn League championship. After this successful debut in professional baseball, he spent the 2000 season with the Charleston RiverDogs in the South Atlantic League. At the start of his pro career, Hamilton's parents quit their jobs so they could travel with their son.

Prior to the 2001 season, Hamilton was involved in a car accident. His mother and father were also injured in the accident, but they recuperated from their injuries. The 2001 season also marked the beginning of his drug and alcohol use, and he made his first attempt at rehab.

All content from Kiddle encyclopedia articles (including the article images and facts) can be freely used under Attribution-ShareAlike license, unless stated otherwise. Cite this article:
Josh Hamilton Facts for Kids. Kiddle Encyclopedia.