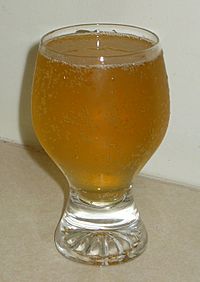 A glass of ginger ale

Ginger ale is a soft drink flavored with the root of a plant known as ginger. It has a sweet yet spicy flavor. Even though it has the name ale, which can be another word for beer, it is not beer. It can be enjoyed by all ages. Canada Dry is a well known maker of ginger ale. Most drinks that are ginger ale come in a green can. 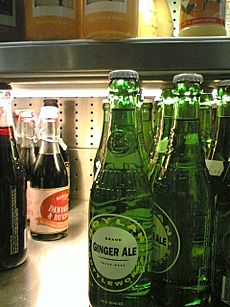 Ginger ale commonly contains carbonated water, sugar or HFCS, and artificial or natural ginger-flavour. Ginger content is often listed on labels in a general "natural aroma" or "Natural flavoring" statement, to preserve secrecy of the complex proprietary mix of spices, fruits and other flavours used. Lemon, lime, and cane sugar are the most common of ingredients. Pineapple and honey are also occasional ingredients. Ginger ale can also contain yeast, when carbonated with natural fermentation.

Most commercial ginger ales made in the United States are made with high fructose corn syrup as a sweetener. 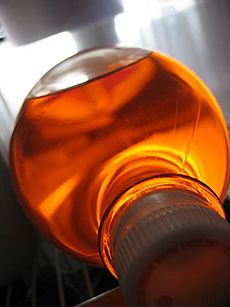 All content from Kiddle encyclopedia articles (including the article images and facts) can be freely used under Attribution-ShareAlike license, unless stated otherwise. Cite this article:
Ginger ale Facts for Kids. Kiddle Encyclopedia.