Jacinto City is a city in Harris County, Texas, United States, east of the intersection of Interstate 10 and the East Loop of Interstate 610. Jacinto City is part of the Houston–Sugar Land–Baytown metropolitan area and is bordered by the cities of Houston and Galena Park. The population was 10,553 at the 2010 census.

In 1941 Frank Sharp established a subdivision which filled with shipyard workers and workers at nearby steel mills and war plants. Jacinto City incorporated in 1947 with nearly 3,800 residents; its first mayor was Inch Handler. Because of the 1947 incorporation, Houston did not incorporate Jacinto City's territory into its city limits, while Houston annexed surrounding areas that were unincorporated. The town still serves as a bedroom community for local industry. In the 1950s the city opened a city hall and recreational facilities. By 1960 the city had 9,500 people and by 1964 the city had 11,500 people. In 1966 the city had seventeen churches, two schools, one hospital, one bank, and one library. A waste-water facility funded by the Environmental Protection Agency opened in 1972; the Handbook of Texas stated that this may be due to complaints from residents about chemical vapors in 1969. In 1990 the city had 9,343 people.

Jacinto City was known for the murder of Louis "Buddy" Musso by Susan (or Suzanne) "Sue" Basso in 1998. Basso lived in Jacinto City and held Musso against his will there; Musso died in an apartment unit used by an accomplice in Houston. Musso's corpse was dumped in neighboring Galena Park.

According to the United States Census Bureau, the city has a total area of 1.9 square miles (4.9 km2), all land.

Jacinto City is in Central Harris County, along the Missouri Pacific Railroad and at the intersection of U.S. Highway 90, Interstate 610, and Interstate 10. It is in close proximity to the San Jacinto battleground. Jacinto City derives its name from the battleground.

There were 2,947 households out of which 48.7% had children under the age of 18 living with them, 63.3% were married couples living together, 11.5% had a female householder with no husband present, and 18.8% were non-families. 16.1% of all households were made up of individuals and 7.3% had someone living alone who was 65 years of age or older. The average household size was 3.45 and the average family size was 3.88. 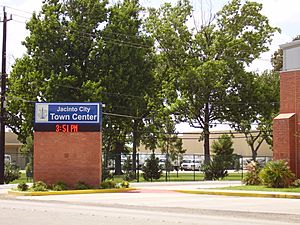 The Jacinto City Department of Parks and Recreation maintains four parks, a swimming pool, a recreation center, and four ball fields. One of its facilities is the Milton Lusk Youth Activity Center.

The Jacinto City Town Center has several facilities, including a community center that may be rented by Jacinto City residents. Jacinto City operates the Heritage Hall, a recreational center for senior citizens of age 60 or older located in the same complex. It provides meals and activities. The center provides transportation to and from Jacinto City, Galena Park, and the Songwood community in Houston. Heritage Hall first opened in 1979.

A group of recreational facilities opened in the 1950s.

All content from Kiddle encyclopedia articles (including the article images and facts) can be freely used under Attribution-ShareAlike license, unless stated otherwise. Cite this article:
Jacinto City, Texas Facts for Kids. Kiddle Encyclopedia.