South Houston is a city in the U.S. state of Texas, within Houston–The Woodlands–Sugar Land metropolitan area and Harris County. The population was 16,983 at the 2010 census. It is bordered by the cities of Houston and Pasadena.

C.S. Woods of the Western Land Company founded the settlement of Dumont in 1907. A post office appeared in 1910. In 1913 Dumont was incorporated as the city of South Houston. Because of the 1913 incorporation, Houston did not incorporate South Houston's territory into its city limits, while Houston annexed surrounding areas that were unincorporated. South Houston's initial industrial activity consisted of shipping produce along the Galveston, Houston and Henderson Railroad. The hurricane of 1915 destroyed many of the local industries. The establishment of the Houston Ship Channel resulted in the establishment of manufacturing industries inland, including in South Houston. Between the 1940s and the early 1960s South Houston found rapid population growth. The city had 7,523 inhabitants in 1960. In 1980 South Houston had 11,782 inhabitants and 303 businesses. In 1990 14,207 inhabitants lived in South Houston.

From the 1980 census to the 1990 census, Hispanics began to move into South Houston by an amount between 1,000 and 3,500 per square mile. Most Hispanics in South Houston were of Mexican descent.

According to the United States Census Bureau, the city has a total area of 7.8 km², none of which is covered with water. 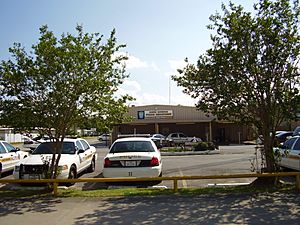 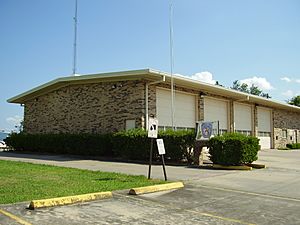 There were 4,593 households out of which 47.7% had children under the age of 18 living with them, 60.1% were married couples living together, 13.9% had a female householder with no husband present, and 19.5% were non-families. 15.4% of all households were made up of individuals and 5.4% had someone living alone who was 65 years of age or older. The average household size was 3.45 and the average family size was 3.86.

All content from Kiddle encyclopedia articles (including the article images and facts) can be freely used under Attribution-ShareAlike license, unless stated otherwise. Cite this article:
South Houston, Texas Facts for Kids. Kiddle Encyclopedia.