Pasadena is a city in the U.S. state of Texas, within the Houston–The Woodlands–Sugar Land metropolitan area. As of the 2010 U.S. Census, the city's population is 149,043,

The Pasadena Volunteer Fire Department is the largest of all volunteer municipal fire departments in the United States.

Prior to European settlement the area around Galveston Bay was settled by the Karankawa and Atakapan tribes, particularly the Akokisa, who lived throughout the Gulf coast region. Spanish explorers such as the Rivas-Iriarte expedition and José Antonio de Evia charted the bay and gave it its name. The pirate Jean Lafitte established a short-lived kingdom based in Galveston in the early 19th century with bases and hide-outs around the bay and around Clear Lake. Lafitte was forced to leave in 1821 by the U.S. Navy.

Following its declaration of independence from Spain the new nation of Mexico moved to colonize its northern territory of Texas by offering land grants to settlers both from within Mexico and from the nearby United States. The colony established by Stephen F. Austin and the Galveston Bay and Texas Land Company of New York rapidly began a wave of settlement around the bay. Following a coup in the Mexican government by General Antonio Lopez de Santa Anna, Texas revolted against Mexican rule in 1835. After several battles and skirmishes the final battle of the Texas Revolution took place near modern Pasadena on April 21, 1836. Santa Anna was captured at Vince's Bayou. Because this was the last conflict that led to the Mexican surrender, Pasadena and neighboring Deer Park have adopted the nickname "Birthplace of Texas".

The Galveston, Harrisburg & Houston Railroad ran through the Allen ranch. There was a problem of cattle being regularly killed on the tracks and in 1875, Allen built a 19-mile (31 km) fence along the east side of the railway right of way to keep the cattle off the tracks. The fence ran from Harrisburg to League City and had four rails and a top rail wide enough to walk on. A gate was placed in the fence at the Harrisburg-Lynchburg Road with a large sign above instructing that it should be closed at all times. The area east of this railroad fence running from Buffalo Bayou to the tracks on Sims Bayou ran all the way to Galveston Bay. It contained 100,000 acres (400 km2) of grazing land for cattle.

"Proposed" towns in or near present-day Pasadena were set up but short lived and either abandoned or never even got off the ground. In 1892 Colonel John H. Burnett of Galveston established an unnamed townsite on the Vince Survey just east of the Allen Ranch. Burnett was involved in both construction and promotion of railroads and knew their impact on the value of property. The land was sold in 10 acres (4.0 ha) lots. He had also established the nearby towns of Deepwater and Genoa, later to be incorporated into Pasadena and Houston. 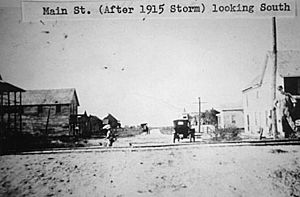 Downtown Pasadena after the 1915 Hurricane.

The 1900 hurricane that destroyed Galveston heavily damaged Pasadena, as well. The city received a population boost from some Galveston refugees who relocated to the mainland following the catastrophe. Donations by the newly created Red Cross, including millions of strawberry plants to Gulf Coast farmers, helped revive the community. This and the subsequent establishment of a major strawberry farm in the area by Texaco founder Joseph S. Cullinan made Pasadena a major fruit producer for many years afterward. As the community recovered major tracts of the Allen Ranch were liquidated opening up new development. Rice farmers from Japan settled in the community further diversifying its agriculture. Champion Coated Paper Company of Ohio opened a paper mill in 1937. Other businesses began to develop.

In 1901 the Texas Oil Boom began with the gusher at Spindletop. The discovery of the oil field at Goose Creek led to increasing petroleum exploration around Galveston Bay. By 1920 refinery operations had appeared in Pasadena and continued to expand thereafter. The world wars gradually brought further industrial development, with Pasadena's growth rate surpassing even neighboring Houston.

Pasadena voted to incorporate in 1923, but residents decided to cancel the incorporation one year later. Pasadena incorporated in 1928. Because of the 1928 incorporation, Houston did not incorporate Pasadena's territory into its city limits, while Houston annexed surrounding areas that were unincorporated.

By the mid-20th century Pasadena's economy had become strongly tied to petroleum and other heavy industry. NASA's Johnson Space Center (JSC) was established near Pasadena in 1963 with the residential community of Clear Lake City, partially under Pasadena's jurisdiction, established nearby. These developments helped to diversify the town's economy significantly.

Former Pasadena City Council member and State Representative Ray Barnhart described the city at the time as "a lovely community but politically corrupt." Barnhart recalled that a half dozen Pasadena officials were indicted in the late 1950s and early 1960s for public corruption.

In 1965, Houston Post reporter Gene Goltz Received the Pulitzer Prize for his exposure of government corruption in Pasadena, Texas, which resulted in widespread reforms.

In the 21st century, Pasadena emerged as a mostly working-class suburb of Houston, with a 60 percent Hispanic population. In 2015, Pasadena 2015 to altered the composition of its city council. The city had eight council seats in single-member-district format. The new plan diverted two of the district seats to at-large representation. Councilman Ornaldo Ybarra said the change will reduce the impact of Hispanics on city elections. The mayor and other council members, however, claim that the change, now allowed under re-interpretation of the Voting Rights Act of 1965, will encourage greater voter turnout and promote interest in the city as a whole, rather than in specific districts. In 2017, a federal judge ruled the plan unconstitutional.

On October 30, 2015, an EF2 tornado struck a warehouse in Pasadena. The warehouse was completely leveled with its roof completely mangled up. The tornado also damaged at least 30 houses throughout the city without any injuries.

The climate in this area is characterized by hot, humid summers and generally mild to cool winters.

Neighborhoods in Pasadena include:

There were 47,031 households out of which 43.1% had children under the age of 18 living with them, 55.8% were married couples living together, 13.1% had a female householder with no husband present, and 25.2% were non-families. 20.4% of all households were made up of individuals and 6.2% had someone living alone who was 65 years of age or older. The average household size was 2.99 and the average family size was 3.48.

The city has several museums, including the Pasadena Historical Museum, the Bay Area Museum and Armand Bayou Nature Center. Pasadena also has a community theater, an annual rodeo, and the Pasadena Philharmonic. The city's newspaper is the Pasadena Citizen.

The Champion paper mill closed in 2005. Because of the odor from the plant, Pasadena had been dubbed by locals with the nickname "Stinkadena." Several country music songs have been recorded with "Pasa-get-down-dena" as the title including Kenefick on their album "Hard Road."

John Travolta, Debra Winger and other actors came to the city to film the 1980 hit movie Urban Cowboy, which depicted life and young love in Pasadena. The film centered on the city's honky-tonk bar Gilley's, which was co-owned by country music star Mickey Gilley. In 1989, Gilley's suffered an arson fire that gutted the interior of the building, including the mechanical bull used in Urban Cowboy. The shell of the building stood until 2006, when it was demolished by the Pasadena Independent School District, its current owner. Only the old sound recording studio remains. Gilley still resides in Pasadena. The old address of Gilley's is a used-car lot. 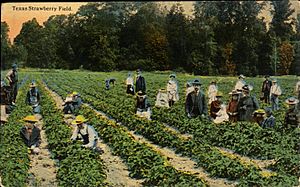 Clara Barton of the American Red Cross purchased 1.5 million strawberry plants and sent them to Pasadena to help victims of the flood get back on their feet. By the 1930s those crops had flourished so much that Pasadena was claiming the title of Strawberry Capital of the World. At its height, the city's strawberry growers shipped as many as 28 train carloads of strawberries each day. To honor that history, the city still holds an annual Pasadena Strawberry Festival. Strawberry Road stretches through much of the city near where the old strawberry crops grew. Attendance at the annual Strawberry Festival was 56,000 in 2008.

Pasadena Philharmonic Society and Orchestra is a combination of two groups. The Society is composed of members of the local community that support the fine arts and classical music. The Orchestra is composed of local music educators, musicians, college students and selected high school students. The Orchestra presented its first performance in the fall of 1982. The Philharmonic has presented performances ever since.

The city operates 15 tennis courts, several baseball fields, and a total of 43 parks total. These include over 14 miles (23 km) of trails, four Youth Recreation Centers, an Adaptive Recreation center, three pools for Swimming or Aquatics, an Athletics department, a Dog Park, Party Rentals, a Golf Course, an Historical Museum, and a Senior Citizen Center.

Armand Bayou Nature Center (ABNC) is a 2,500 acres (1,000 ha) preserve on the western shore of Galveston Bay in Pasadena. It is the only remnant of this region's original eco-systems: coastal tallgrass prairie, bottomland forest and bayou. Armand Bayou also is a breeding and nursery ground for many finfish and shellfish and a haven for rarely seen species such as bobcats and owls.

As of 2010[update] ABNC has been designated as one of five preserves under the Texas Coastal Preserve Program of the Texas Parks and Wildlife Department.

Pasadena has formalized sister city agreements with the following cities:

All content from Kiddle encyclopedia articles (including the article images and facts) can be freely used under Attribution-ShareAlike license, unless stated otherwise. Cite this article:
Pasadena, Texas Facts for Kids. Kiddle Encyclopedia.