Atascocita is a census-designated place (CDP) in an unincorporated area within Harris County, Texas, United States within the Houston metropolitan area. As of the 2010 census it had a population of 65,569. It is located north and south of Farm to Market Road 1960 about 6 miles (10 km) east of Humble and 18 miles (29 km) northeast of downtown Houston in northeastern Harris County.

Bordered on its eastern shore by the 12,000-acre (4,900 ha) Lake Houston, the community contains several parks, country clubs, and golf courses, including Atascocita Country Club, Walden on Lake Houston Golf and Country Club, and Tour 18, a recreation of some of the United States' most celebrated golf holes.

The City of Houston annexed portions of what would become Atascocita in the 1960s, but it was de-annexed in the late 1970s.

Construction in the area began in the 1970s. In the 1990s Atascocita included fifteen neighborhoods and was one of the fastest-growing developments in the Greater Houston area.

Atascocita has two community newspapers, The Tribune Newspaper and The Atascocita Observer. 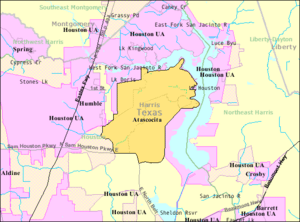 Map of the Atascocita CDP

Syd Kearney, author of A Marmac Guide to Houston and Galveston, "There are fine resort homes in sections such as Atascocita Shores."

Atascocita's median home price is $153,100. There are many subdivisions in Atascocita, ranging from small, intimate neighborhoods to large, master-planned communities like Eagle Springs, Walden on Lake Houston, The Groves, The Bridges on Lake Houston, Balmoral, Lakeshore, Waters Edge, Summerwood, Pinehurst and Atascocita Shores. New home prices range from under $200,000 to over $20 million.

Lake Houston is in the Atascocita area. Syd Kearney, author of A Marmac Guide to Houston and Galveston, said that Atascocita was "synonymous with golf, tennis, and other great recreational features on Lake Houston." 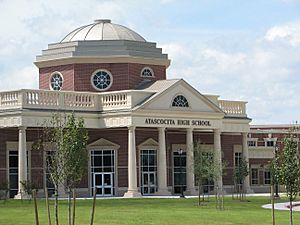 Previously Humble High School served the Atascocita area until rapid growth in the community forced the construction of Atascocita High School in 2006. With an exterior modeled after Thomas Jefferson's iconic Monticello estate, the 435,000-square-foot (40,400 m2), $46.9 million school was built on a 100-acre (40 ha) heavily wooded parcel of land in the center of Atascocita. Since its opening, Atascocita High School has garnered an impressive list of academic accolades including being labeled a "Recognized" campus by the Texas State Board of Education in 2010. All students attending the Humble Independent School District have the option to apply for admission to Quest Early College High School, a magnet high school in Atascocita.

The PK-5 Holy Trinity Episcopal School is in proximity to Atascocita. 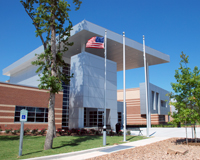 Lone Star College opened its Atascocita Center in August, 2011. The center offers access to adult basic education/GED, English as a Second Language, college classes to meet degree requirements and Academy for Lifelong Learning (ALL) for seniors. The University of Houston–Downtown also offers a bachelor's degree in business administration in the evenings at the center.

Atascocita is served by the Atascocita Branch Library of the Harris County Public Library (HCPL), located inside the CDP. In 1986 the Atascocita Hi Neighbor group began to campaign for a library in Atascocita. The 12,000-square-foot (1,100 m2) branch was built from 1994 to 1996 with the help of Janette Dennis, an Atascocita resident and philanthropist, and opened on May 5, 1996. Janette Dennis helped spearhead "The Friends of the Atascocita Library" (FOAL) donates around $20,000 United States dollars per year to the library.

All content from Kiddle encyclopedia articles (including the article images and facts) can be freely used under Attribution-ShareAlike license, unless stated otherwise. Cite this article:
Atascocita, Texas Facts for Kids. Kiddle Encyclopedia.