Pearland ( PAIR-land) is a city in the U.S. state of Texas, within Brazoria County, with portions extending into Fort Bend and Harris counties. The city of Pearland is a principal city within the Houston–The Woodlands–Sugar Land metropolitan statistical area. At the 2010 U.S. census, the city's population was 91,252, up from a population of 37,640 at the 2000 census. Pearland's population growth rate from 2000 to 2010 was 142 percent, which ranked Pearland as the 15th-fastest-growing city in the U.S. during that time period, compared to other cities with a population of 10,000 or greater in 2000. Pearland is the third-largest city in the Greater Houston area, and from 2000 to 2010, ranked as the fastest-growing city in Greater Houston and the second-fastest-growing city in Texas. Per the American Community Survey of 2019 the population had risen to an estimated 131,448.

The area that is now Pearland had its humble beginnings near a siding switch on the Gulf, Colorado and Santa Fe Railway in 1882. When a post office was established in 1893, the community was originally named "Mark Belt". On September 24, 1894, the plat of "Pear-Land" was filed with the Brazoria County courthouse by Witold von Zychlinski, a man of Polish nobility. At the time Pearland had many fruits harvested by residents. Zychlinski saw the pear trees and decided that "Pearland" would make a good name for the community.

Pearland was promoted by developers Allison & Richey Land Company as an "agricultural Eden". The first subdivision was called "Suburban Gardens". The Galveston hurricane of 1900 and the Galveston hurricane of 1915 destroyed most of the fruit trees and slowed growth for a considerable period of time, and caused a period of desertification in the area. In 1914, with agriculture rebounding and the end of desertification, Pearland had a population of 400, but a devastating freeze in 1918 was another setback to the local farming enterprises. Oil was discovered nearby in 1934, which led to the development of the Hastings Oilfield, though it did not spur much growth, as the population fluctuated between 150 and 350. From the 1970s, the town has grown to its present-day population.

In 2009 the city reported that the combined area of the city limits and of nearby unincorporated areas, including Country Place and Silverlake, was 72 square miles (190 km2).

Nearly 60% of the local population claim religious affiliation as of 2020. Christianity is the largest religion in Pearland and the surrounding Greater Houston metropolitan area. Baptists formed the largest Christian group followed by the Catholic Church then the United Methodist Church. Large non-Christian religious groups included Islam, Judaism, and eastern religions including Hinduism and Buddhism.

St. Helen Catholic Church of the Roman Catholic Archdiocese of Galveston-Houston was established in 1966. Its previous church building had a capacity of 900, it was building a new sanctuary, with a capacity of 15,000 and a cost of $7 million. The expansion plans also added parking spaces and installed a bridal facility. The sanctuary construction was to begin fall 2002 and parking construction was to begin summer 2002. In 2002, 4,000 families were members, and in 2016 this had increased to 6,000, making it the largest Catholic church in Brazoria County. The property includes a K–8 school, St. Helen Catholic School. There is another Catholic parish with property in the Pearland city limits; St. Luke the Evangelist Church maintains the Cenacle Learning Center (CLC) in Pearland, while the main campus is in an unincorporated area in Harris County.

New Harvest Christian Fellowship, a non-denominational church established in 1999 with 60 members, was established by Keith Anderson. It first held services at Challenger Elementary School before moving into a 100-seat, 3,600-square-foot (330 m2) worship center. On April 7, 2019 it was to convert the previous sanctuary into a youth ministry building and to open a new sanctuary. It is affiliated with the Southern Baptist Convention.

New Hope Church, an independent Christian church, started in Pearland in 1989 with 100 in attendance. As of 2022, the church had grown to five campuses with over 10,000 worshippers.

Chabad Pearland Jewish Center is the first Jewish center of worship in Pearland, established by Yossi and Esty Zaklikofsky in 2009. In addition to Pearland, it also serves Alvin and Friendswood.

Sri Meenakshi Temple in Pearland had its property purchased in 1978 and was established in 1979. Pat Turner of the Houston Chronicle wrote that the initial facility "was barely big enough for one person to stand in while performing worship services (pooja)." New facilities were established circa 1995. From its founding in 1979 to the opening of the Chabad Pearland Jewish Center in 2009, it was the only non-Christian place of worship in Pearland.

Rewake Inc., an independent Christian group, was founded in 2016 and chaired by Pastor Phil Brown. The group conducted services at the Bakfish Brewing Co. brewery in Pearland. Dana Burke of the Bay Area Citizen described it as non-traditional.

In the 1800s, Pearland consisted of prairie. Residents harvested fruit and vegetables such as cantaloupes, corn, figs, pears and watermelons. In the 1930s and 1940s Pearland had many dance halls and beer joints that entertained people from the Hastings and Manvel oil fields. 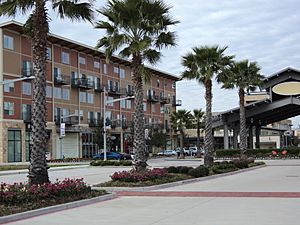 By 1990, the city limits had extended into Harris County. In the 1990s, home developers began buying large tracts of land, changing the geography of the city. Former rice fields filled with houses. The historic town center of Pearland is at the intersection of Texas State Highway 35/Main and Broadway. West Pearland has a lot of suburban development, while East Pearland has older houses and, according to Maggie Galehouse of the Houston Chronicle, Pearland's "rural roots still show" in the east side. Pearland's main east-west corridor is Farm to Market Road 518/Broadway.

Geri Maria Harris of the Houston Press said that, while Pearland was not known for its restaurants, "if you happen to live there, you know there are plenty of places to get a good bite." 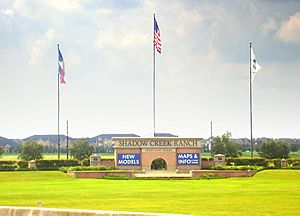 Eighty-three percent of Pearland is residential, which is a major contributing factor to the high population. The city is home to many master-planned communities; Sunrise Lakes, Southern Trails, Southdown, Lakes of Highland Glen, and Shadow Creek Ranch are among the most popular master-planned communities in Brazoria County. Country Place and Silverlake are in unincorporated areas near Pearland.

On December 5, 2011, The Metropolitan Transit Authority of Harris County purchased 15.26 acres (6.18 ha) of land near Hwy. 288 and FM 518 in the Pearland area for a future "Park and Ride" facility. Alan Parker Properties LP represented the seller, Carolyn and Frank Wenglar, in the $3.95 million land sale. Metro, which currently operates 29 Park and Rides throughout Harris County, said that the new facility will give Brazoria County residents another option for traveling to the Texas Medical Center and other downtown Houston destinations. The new facility was scheduled to begin operations in the fall of 2013, but property was given to the city in a cash swap. The city is exploring a private run service or other uses for the property.

The closest publicly owned airport is the Brazoria County Airport, located in an unincorporated area.

Commercial airline service is provided out of Houston from William P. Hobby Airport and George Bush Intercontinental Airport, both in Houston.

Pearland is served by State Highway 288 which connects the city to Houston. FM 518, locally known as Broadway, is the main east-west artery of the city. State Highway 35, locally called Main Street and known as Telephone Road, is the main north-south artery of the city. Given the spread out area, SH 288 serves the westernmost part of the city, while SH 35 serves the easternmost part as both connect Pearland to Houston (FM 865/Cullen Blvd also connects Houston as well in between). The Texas State Highway Beltway 8 (Sam Houston Tollway) services the northern part of Pearland. It is located adjacent to the northern Brazoria County and southeastern Harris County border. It also serves as one of the largest tollways in the Houston area.

Pearland's labor force and job base grew substantially with its population growth. The number of jobs in the community grew from 9,169 in 2000 to 17,552 in 2008. The total labor force that resides in the community increased from approximately 20,000 in 2000 to 45,368 in 2010. A majority of the community's labor force commutes daily into the Texas Medical Center and other employment centers in the region. Pearland also has many people employed by NASA at the Lyndon B. Johnson Space Center.

Pearland's workforce and community amenities have made Pearland an attractive location for large medical-related companies seeking new quarters. Kelsey-Seybold Clinic's new 170,000-square-foot (16,000 m2) administrative office building in Shadow Creek Ranch was expected to open in the fall of 2013, with 800 employees. This follows two other medical manufacturing facilities: Cardiovascular Systems, which opened in 2010, and Merit Medical Systems, which began construction in 2011. The Merit project, 118,000 square feet (11,000 m2), provides facilities for 220 research and development employees.

Other employers are a reflection of Pearland's suburban economy, with the vast majority of it retail.

According to a 2020 Comprehensive Financial Report, the top employers in Pearland were:

Pearland was one of two Texas cities to average double-digit growth in retail sales from 2004 to 2009, and its retail market was the state's fastest growing over the five-year periods ending 2009, 2010, and 2011. Prominent mixed-use lifestyle and shopping complexes service residents with national retailers and dining establishments.

Since 2015, "Wobble before you Gobble", Pearland's largest Annual Health Fair is hosted by the local community. Founded by a local Primary care Physician Dr Vishalakshmi Batchu, this health fair happens around the second or third week of November at Pearland Town Center. The event showcases several big and small healthcare facilities. Free health checkups, screenings, vaccinations, procedures, nutrition, lifestyle, are offered at the fair. Various fine arts clubs from local schools participate in the fair and showcase their talent in forms of singing, dancing, workouts, skits and exercises. Several workout specialists offer workout sessions including zumba, salsa, bollywood, yoga and many more formats. The event is grassroots in nature, which means, it is organized by residents of Pearland. 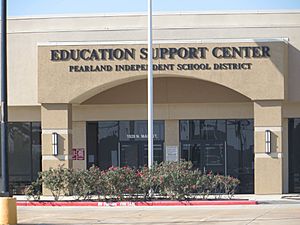 The Education Support Center, the headquarters of Pearland ISD 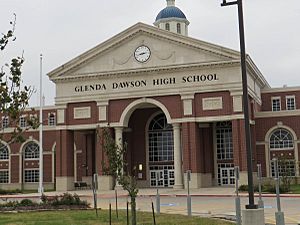 As of 2017[update] Awty International School in Spring Branch, which includes the Houston area's French international school, provides bus services for students to and from Pearland, as does Saint Thomas' Episcopal School near Meyerland, and Saint Thomas High School in central Houston.

The Pearland ISD and Alvin ISD portions are served by Alvin Community College (ACC); the Alvin ISD part is in ACC's taxation boundary.

The Pasadena ISD portion is served by San Jacinto College, and the Houston ISD and Fort Bend ISD parts are served by Houston Community College (HCC).

The University of Houston–Clear Lake (UHCL) has a satellite campus located within the city.

The Pearland Library at 3522 Liberty Drive is a part of the Brazoria County Library System. As of September 13, 2008 the library was closed for many months due to Hurricane Ike storm damage. It reopened in March 2009.

All content from Kiddle encyclopedia articles (including the article images and facts) can be freely used under Attribution-ShareAlike license, unless stated otherwise. Cite this article:
Pearland, Texas Facts for Kids. Kiddle Encyclopedia.