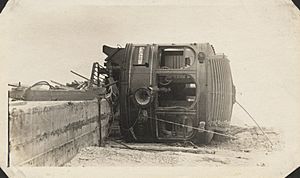 Texan railways were disrupted by the hurricane, including interurban routes used to transport evacuees

The 1915 Galveston hurricane was an intense, deadly and very destructive storm. In August 1915 this hurricane hit the Caribbean Island areas from the Leeward Islands to western Cuba and then blasted Galveston, Texas with winds around the Category 4 level, 135 mph (217 km/h). The winds of this hurricane were at 145 miles per hour (233 km/h) when the storm struck Cuba. Almost 400 people died because of the storm.

All content from Kiddle encyclopedia articles (including the article images and facts) can be freely used under Attribution-ShareAlike license, unless stated otherwise. Cite this article:
1915 Galveston hurricane Facts for Kids. Kiddle Encyclopedia.