Mission Bend is a census-designated place (CDP) around Texas State Highway 6 within the extraterritorial jurisdiction of Houston in Fort Bend and Harris counties in the U.S. state of Texas; Mission Bend is 4 miles (6 km) northwest of the city hall of Sugar Land and 20 miles (32 km) southwest of Downtown Houston. The population was 36,501 at the 2010 census.

Map of the Mission Bend CDP

There were 8,978 households, out of which 55.7% had children under the age of 18 living with them, 70.5% were married couples living together, 12.5% had a female householder with no husband present, and 12.4% were non-families. 9.5% of all households were made up of individuals, and 1.1% had someone living alone who was 65 years of age or older. The average household size was 3.43 and the average family size was 3.67.

Fort Bend County owns and operates the Mission West Park in Mission Bend. The park includes a baseball blacktop, a play area, tables, a walking track, and a volleyball court. 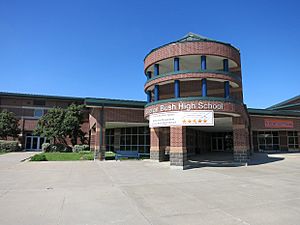 Alief schools that serve Harris County areas in the Mission Bend CDP include Petrosky Elementary School (in the CDP), Miller Intermediate School (outside of the CDP) for non-bilingual and bilingual students, and Albright Middle School (inside the CDP). Elementary school bilingual students are zoned to Rees Elementary School. Alief ISD students are randomly assigned to either Elsik, Hastings, or Taylor high schools. None of the high schools are within the Mission Bend CDP. The district also maintains two magnet schools, Kerr High School and Alief Early College High School.

Iman Academy Southwest is currently in the limited purpose Houston city limits. Previously it was in Mission Bend CDP.

Mission Bend Christian Academy is located north of the CDP.

All content from Kiddle encyclopedia articles (including the article images and facts) can be freely used under Attribution-ShareAlike license, unless stated otherwise. Cite this article:
Mission Bend, Texas Facts for Kids. Kiddle Encyclopedia.