Cinco Ranch is a census-designated place and master-planned community located in the extraterritorial jurisdiction of the city of Houston within Fort Bend and Harris counties in the U.S. state of Texas. The population was 18,274 at the 2010 census. It lies about 25 miles (40 km) west of the Harris County seat of Houston and 10 miles (16 km) north of the Fort Bend County seat of Richmond. Cinco Ranch is considered to be part of the Greater Katy area and is roughly 10 miles southeast of the city of Katy.

The Cinco Ranch community goes back to before Texas became a republic. In the 1820s, pioneer Moses Austin was granted by the Spanish government the authority to settle 300 families in the valleys of the Brazos and Colorado rivers. He died before he was able to accomplish this, but his son Stephen F. Austin was able to complete his father's wishes, even under the newly established Mexican government. One of the men who moved into these 300 slots of land (each one over 4,000 acres/16 km2) was Randolph Foster, whose land spread across Fort Bend and Waller counties and upon which wild horses, deer, Native Americans and buffalo lived.

Foster's daughter married Thomas Blakeley, cattleman and future sheriff of Fort Bend County. Their son, Bassett Blakeley, took after his father and grandfather and soon grew into a cowboy and cattleman. Bassett Blakeley owned 15,000 acres (61 km2) of land and 14,000 head of Brahman cattle, along with his grandfather's land. The cowhands of his Blakeley Ranch annually drove 10,000 head of cattle to the railheads in Kansas.

In 1937, Blakeley sold the working ranch to William Wheless, who convinced four of his friends, J.S. Abercrombie, W.B. Pryon, H.G. Nelms and L.M. Josey—all, like him, wealthy from oil—to become his partners at the ranch. In a nod to its Spanish roots perhaps, they called it Cinco Ranch (cinco means "five" in Spanish). Only the Wheless family lived on the ranch, but all of the families visited on many holidays and weekends, making use of a huge clubhouse complete with two bedroom wings. The ranch was not merely involved in cattle—it also had several acres of rice—for years, the main output of Katy, Texas—and peanut production.

Cinco Ranch has a growing network of greenbelt trails, making it possible to jog, bike or rollerblade between almost anywhere in Cinco Ranch, including recreational facilities and schools in the community. The multi-station Exer-Trail is for workouts. There is also the Bayou Nature Trail, extending nearly four miles and preserving almost 70 acres (280,000 m2) of woodland and wetland habitat. Plans are currently underway to connect the Bayou Nature Trail to the Buffalo Bayou Hike And Bike Trail. This will allow residents of Cinco Ranch to ride their bikes from the Grand Parkway to Beltway 8 - a 26-mile (42 km) bike trail.

The YMCA offers free Child Watch and Kid Watch services for members. The YMCA also offers Before and After School programs for children ages 5–12 in most KISD elementary schools. Other activities include Spring Break and Winter Break camps.

The YMCA was originally named after Ken Lay; in the wake of the corruption scandal that led to the downfall of Enron Corporation, a major Houston-based energy company which Lay headed, he asked for his name to be removed from the YMCA in June 2006, shortly before his death.

The Katy Amateur Radio Society (KARS) has about 45 amateur radio operators.[1] The KARS net operates every Tuesday at 8:00 PM on the KT5TX 147.20 MHz repeater. KARS monthly meetings are held on the 2nd Monday of every month at the West I-10 Fire Station #4 on Franz just east of Grand Parkway.[2] 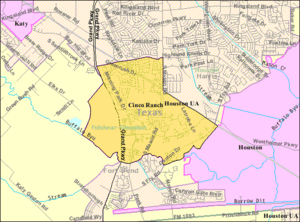 Map of the Cinco Ranch CDP

According to the United States Census Bureau, the CDP has a total area of 4.9 square miles (12.8 km²). None of the area is covered with water.

14% of Cinco Ranch residents report German ancestry, another 14% report English ancestry, and 10% report Irish. These are the three most common reported ancestries. Fourth is Asian, at 7%.

There were 3,375 households, out of which 63.7% had children under the age of 18 living with them, 84.9% were married couples living together, 3.8% had a female householder with no husband present, and 9.2% were non-families. 7.5% of all households were made up of individuals, and 1.2% had someone living alone who was 65 years of age or older. The average household size was 3.32 and the average family size was 3.52.

By 2017 the Cinco Ranch area and the vicinity was known as "Katyzuela" as there were about 5,000 ethnic Venezuelans living in the area. 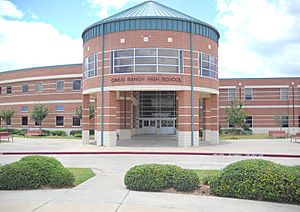 Pupils in Cinco Ranch are zoned to schools of the Katy Independent School District in and around Cinco Ranch.

As of 2019[update] The Village School in the Energy Corridor area has a bus service to Cinco Ranch.

Cinco Ranch is served by the Cinco Ranch Branch Library of the Fort Bend County Libraries system, located across from Cinco Ranch High School and one block from Texas State Highway 99 (Grand Parkway). The library first opened as the Katy/Fort Bend Branch Library in a room on the campus of the University of Houston System at Cinco Ranch in June 1998. In 1999 the branch, which outgrew its first location, moved to the former Cinco Ranch development company sales office as a result of the efforts of the Katy/Fort Bend Friends. The community asked for a larger library, and Fort Bend County judge Jim Adolphus organized efforts to have a library established. Adolphus negotiated the donation of a library site from Terrabrook, a developer in Cinco Ranch, and secured a challenge grant. In addition, Adolphus and Fort Bend County judge candidate Bob Hebert co-hosted a fundraising gala for the challenge grant. The Cinco Ranch community, led by the Katy/Fort Bend Friends association, worked with Fort Bend County officials to find funds for the construction of a new library. The current 33,500 square feet (3,110 m2) library opened on April 3, 2004.

All content from Kiddle encyclopedia articles (including the article images and facts) can be freely used under Attribution-ShareAlike license, unless stated otherwise. Cite this article:
Cinco Ranch, Texas Facts for Kids. Kiddle Encyclopedia.