Katy Mills is a shopping mall in Katy, Texas, within the Houston–Sugar Land–Baytown metropolitan area, developed by The Mills Corporation and now managed by Simon Property Group, who owns 62.5% of it. The mall opened on October 28, 1999 and hosted a variety of over 200 specialty stores. Katy Mills has about 1.3 million square feet (0.12 km2) of retail space.

Katy Mills is a one-story facility that sits on 1.3 square miles (3.4 km2) of land, located next to Typhoon Texas water park was opened in the Memorial Day weekend of May 2016 and just off of Interstate 10 exit 741. The mall is built with a "racetrack" design and one complete pass around the mall on Katy Mills Cir. road is approximately 1 mile (1.6 km).

On October 28, 1999, people gathered around to visit the newly open mall. Photos of the opening night can be found here, taken by Darel Rex Finley. 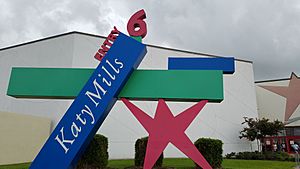 Katy Mills closed on March 19, 2020 due to the COVID-19 pandemic, but reopened in June and added special signage to guide shoppers on how to stay safe.

The shopping mall is located within Fort Bend County, Texas, although a future anchor space and a small portion of the parking lot is located in neighboring Harris County.

All content from Kiddle encyclopedia articles (including the article images and facts) can be freely used under Attribution-ShareAlike license, unless stated otherwise. Cite this article:
Katy Mills Facts for Kids. Kiddle Encyclopedia.