Crosby is a census-designated place in Harris County, Texas, United States. The population was 2,299 at the 2010 census. 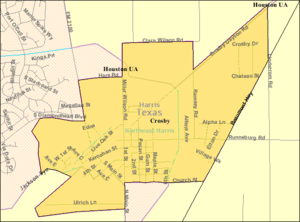 According to the United States Census Bureau, the CDP has a total area of 2.3 square miles (6.0 km2), all of it land.

The site north of U.S. Route 90 (according to some) was an encampment nicknamed Lick Skillet in 1823 by Humphrey Jackson, one of the 300 original colonists to settle Texas. The name "Lick Skillet" came from the phrase, "The East Texas oxen team drivers sipped the spring sweet water and licked their skillets clean."

Humphrey Jackson (1784–1833) moved to Texas from Louisiana in September 1823 and built a log cabin outside Austin's colony on the San Jacinto River, 0.5 miles (800 m) west of the site of present-day Crosby. On August 16, 1824, the Baron de Bastrop granted him title to a league and a labor of land, including the place where he had settled, in what is now Harris County. Jackson next petitioned the Mexican government to form the San Jacinto District under control of the Austin colony; he was elected alcalde of the new district in 1824, 1825, and 1827, and served as ex officio militia captain of the San Jacinto area. Jackson was buried at Crosby. Jackson's Bayou in eastern Harris County is probably named for him.

Near what is now the Southern Pacific Railroad, the town was named for G.J. Crosby, a railroad construction engineer. In 1861, the Sabine and Galveston Bay Railroad and Lumber Company installed tracks through this site. World War II brought the population to over 900, and the population continued to grow.

The site south of Highway 90 is historical Barrett Station. Barrett's Settlement was founded by Harrison Barrett (1845–1917) and has been registered in the Texas Family Land Heritage as Texas Century Farm. Born into slavery, Barrett was the son of Simon and Lisa Barrett who came to Texas from Louisiana. He had two brothers and two sisters.

Following the emancipation of Texas slaves in 1865, Barrett spent several years gathering his family together. He eventually found all of them except one sister, and they settled on land east of the San Jacinto River. He purchased this land in 1889 and began a community that later would be known as Barrett's Settlement. Beginning with seven houses, the community grew to include additional homes, farms, and businesses. Barrett established a school, church, and cemetery. After a post office station was opened there in 1947, the area became known as Barrett Station. Harrison Barrett's homestead, twice rebuilt by his descendants, stands on its original location.

There were 666 households out of which 35.4% had children under the age of 18 living with them, 49.4% were married couples living together, 15.8% had a female householder with no husband present, and 30.3% were non-families. 26.1% of all households were made up of individuals and 11.1% had someone living alone who was 65 years of age or older. The average household size was 2.57 and the average family size was 3.09.

The climate in this area is characterized by hot, humid summers and generally mild to cool winters. According to the Köppen Climate Classification system, Crosby has a humid subtropical climate, abbreviated "Cfa" on climate maps.

All content from Kiddle encyclopedia articles (including the article images and facts) can be freely used under Attribution-ShareAlike license, unless stated otherwise. Cite this article:
Crosby, Texas Facts for Kids. Kiddle Encyclopedia.