Channelview is a census-designated place (CDP) in the U.S. state of Texas on the eastside of Houston, Harris County. The population was 38,289 at the 2010 U.S. census.

Channelview was given its name since it is located on the northeastern curve of the Houston Ship Channel. The site of Channelview was home to Lorenzo de Zavala, one of the founding fathers of the Republic of Texas. During World War II the area south of Market to the Ship Channel, and what is now DeZavala St. to the tollway, was part of the U.S. Army Ordnance Depot. 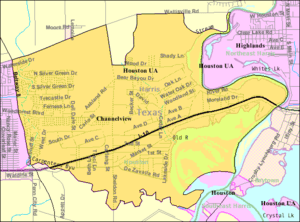 Map of the Channelview CDP

Channelview, Texas from the Handbook of Texas Online

Residents of both Channelview ISD and Galena Park ISD (and therefore all of Channelview CDP) are zoned to San Jacinto College.

All content from Kiddle encyclopedia articles (including the article images and facts) can be freely used under Attribution-ShareAlike license, unless stated otherwise. Cite this article:
Channelview, Texas Facts for Kids. Kiddle Encyclopedia.