Bellaire is a city in southwest Harris County, Texas, United States, within the Houston–Sugar Land–Baytown metropolitan area. As of the 2010 U.S. Census, the city population was 16,855 and is surrounded by the cities of Houston and West University Place.

Bellaire is known as the "City of Homes," owing to its mostly residential character; however, there are offices along the 610 Loop within the city limits.

A photograph of Bellaire, dated 1911, from the Houston Post archives

Bellaire was founded in 1908 by William Wright Baldwin, who was the president of the South End Land Company. Baldwin, a native of Iowa, was well known as the vice president of the Burlington Railroad. Bellaire was founded on what was part of William Marsh Rice's 9,449 acres (38.24 km2) ranch. Baldwin surveyed the eastern 1,000 acres (4.0 km2) of the ranch into small truck farms. He named those farms "Westmoreland Farms". Baldwin started Bellaire in the middle of "Westmoreland Farms" to serve as a residential neighborhood and an agricultural trading center. South End Land Company advertised to farmers in the Midwestern United States. Baldwin stated that the town was named "Bellaire", or "Good Air" for its breezes". Bellaire may have been named after Bellaire, Ohio, a town served by one of Baldwin's rail lines.

Six miles of prairie was a buffer zone between Houston and Bellaire. Originally the town was bounded by Palmetto, First, Jessamine, and Sixth (now Ferris) Streets. In 1910 Edward Teas, a horticulturist, moved his nursery to Bellaire from Missouri so Teas could implement Sid Hare's landscaping plans. Bellaire was incorporated as a city with a general charter in 1918, ten years after its founding. Bellaire had a population of 200 at the time. Because of the 1918 incorporation, Houston did not incorporate Bellaire's territory into its city limits, while Houston annexed surrounding areas that were unincorporated.

Bellaire's population had reached 1,124 in 1940. After 1940, Bellaire had a rapid population explosion in the post-World War II building boom. On December 31, 1948, the city of Houston had annexed the land around the city of Bellaire, stopping the city of Bellaire's land growth. Bellaire remained independent of Houston; Bellaire adopted a home rule charter with a council-manager government in April 1949. By 1950 the city's residents had numbered 10,173, and there were 3,186 houses. However each subsequent year for the next two years, an additional 600 to 700 new houses opened. Due to the resulting population increase, several schools, including Bellaire High School, Marion High School, and two elementary schools, were established in that period, and Condit Elementary received a new addition. In the 1960s 250 houses in Bellaire were demolished to make way for the right of way of the 610 Loop, which bisected the city. 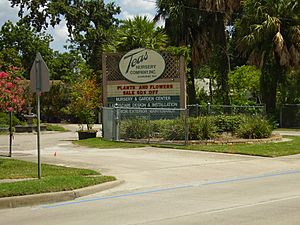 Teas Nursery, which was started by horticulturist Edward Teas; it was closed in 2010, later to become a park

According to a Bellaire resident quoted in the Houston Post, prior to 1992, the tax base of the city of Bellaire had been decreasing. After neighbor West University Place eased restrictions on developers, new houses were constructed in West University Place, and the city gained a larger tax base. Bellaire decided to also liberalize its development restrictions to allow for new development by streamlining its no-growth building permit process. According to Karl Lewis, a vice president and sales manager at John Daugherty Realtors, when the prices of West University Place land reached about $20 per square foot, area home buyers began to consider Bellaire, which had an average price of $10–12 per square foot. Don Stowers of the Houston Press said that Bellaire and West University Place had "comparable" attributes such as independent fire and police departments, zoning, recreation facilities and parks, and schools "among the best in Houston." Michael Blum, president of Blum & Associates Realty, said "Bellaire is a bargain." Blum added that Bellaire was affordable compared to similar American neighborhoods and that Bellaire had proximity to business districts, "excellent" municipal services, and "superior" schools. Affluent families increasingly moved to Bellaire. The price of an average house in Bellaire increased from $75,000 to $500,000 from 1986 to 2006.

In 2002 the City of Bellaire attempted to acquire all or part of the 10 acres (4.0 ha) Teas Nursery, Bellaire's oldest business and the oldest nursery in Greater Houston, for park development. The company fought the city's take-over attempt. During that year the owners of Teas sold 5 acres (2.0 ha) at the rear of the property to Lovett Homes, a home developer. Frank Liu, the owner of Lovett Homes, said that it had an option to buy the remaining 5 acres (20,000 m2). When the City of Bellaire denied a replat application sent by Teas Nursery, in June 2002 the nursery filed a lawsuit against the city and its zoning commission. In 2005 the lawsuit was settled out of court.

During the Hurricane Rita evacuation, a bus filled with residents from Brighton Gardens, a nursing home in Bellaire, caught on fire and exploded in the city of Wilmer. The September 23, 2005, explosion killed 24 people out of the 38 residents and employees in the bus. The resulting lawsuit was settled in June 2009. On March 23, 2008, a tour bus carrying Tejano singer Emilio Navaira crashed in Bellaire. By 2008, an increasing number of houses sold for over $1,000,000.

The city is surrounded by Houston, West University Place, and Southside Place.

Bellaire's housing lots are 75 feet (23 m) by 130 feet (40 m), allowing for houses larger than those that could be built on typical 50 feet (15 m) by 120 feet (37 m) West University Place lots. A Bellaire lot can accommodate a house with a detached garage and a swimming pool, while the typical West University Place lot could accommodate a newly constructed Georgian house described by Don Stowers of the Houston Post as "lot-hugging." The more spacious and inexpensive housing lots prompted area home seekers to consider Bellaire.

The original Bellaire housing stock typically consisted of 3 bedroom, 1 bathroom post-World War II houses described by Stowers as "smallish." Because of the attributes, developers did not hesitate to tear these houses down and build new houses. Some individuals chose to renovate their houses instead of having them torn down. Many individuals who would otherwise renovate the houses reconsidered their decisions as the land value increased. In some cases the land value was higher than the value of the structure on the lot. Some subdivisions had larger houses, particularly the Carroll subdivision south of Bellaire Boulevard and the Braeburn Country Club Estates subdivision between Chimney Rock and Rice. Many of the houses in those subdivisions were built in the 1950s and early 1960s, and many were on .5 acres (0.20 ha) lots. Karl Lewis, the vice president and sales manager of John Daugherty Realtors, said that many of the houses were "still quite attractive" and "similar to the large Tanglewood homes." In 1992 smaller lots in Bellaire were about $50,000 ($75921.96 in today's money) and up, while larger lots were $300,000 ($455531.76 in today's money) to $500,000 ($759219.61 in today's money).

In a 2007 Houston Press article John Nova Lomax, a journalist, said that parts of Bellaire's downtown had "a certain raffish 1950s charm – the Bellaire Broiler Burger, for example – but it’s boring." Lomax stated in a 2008 Houston Press article that, due to the growth and dominance of Houston, municipal enclaves with their own services, including Bellaire, "are little more than glorified neighborhoods."

Many Bellaire streets, such as "Holly," "Holt," "Maple," and "Pine," are named after trees. The word "Holt" means a small grove or a forest of trees.

One community in Bellaire, South dale, was developed by William G. Farmington, the developer of Tanglewood. South dale was originally developed in the late 1940s with two bedroom houses. The houses were marketed to World War II veterans. The houses were about four times less expensive than the around $25,000-each (${{inflation|USD|25000|1948 KHOU-TV. November 20, 2012. Retrieved on November 20, 2012.</ref> 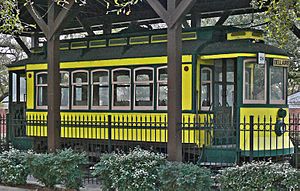 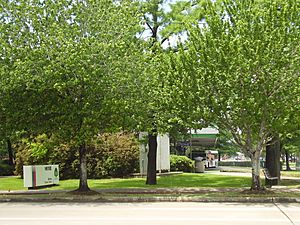 Bellaire is a member city of the Metropolitan Transit Authority of Harris County, Texas (METRO). The city is served by bus lines 2 (Bellaire), 17, 33 (Post Oak Crosstown), 49 (Chimney Rock Crosstown), and 65 (Bissonnet). The Bellaire Transit Center, located at 5100 Bellaire Boulevard at South Rice Avenue, has four lines (2, 33, 49, 65). As of 2010 METRO has proposed to build the Bellaire Station as part of the METRORail University Line.

In Bellaire's early history, Bellaire Boulevard and a historic street car line connected Bellaire to Houston. The street car line, which ran a four-mile (6 km) stretch from central Bellaire to Houston's Main Street, started construction in 1909. The streetcar line consisted of one railway track and an overhead electric wire. A waiting pavilion and a turnaround loop were located at the terminus in Bellaire. The Houston Electric Company had simultaneously constructed a south end line from Eagle Avenue to what is now Fannin Street to connect to the Bellaire Boulevard line. Service, with one required transfer at Eagle Avenue, began on December 28, 1910. The streetcar was nicknamed the "Toonerville Trolley". On September 26, 1927, the trolley line was abandoned and replaced by a bus line. This was due to frequent derailments caused by a worn-out track and the advent of the automobile. In 1985, a similar streetcar was acquired in Portugal and brought to Bellaire for permanent display. 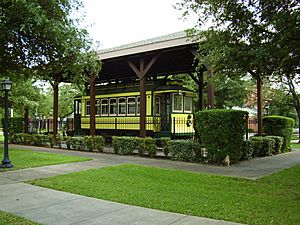 The historic Bellaire street car is within Paseo Park

Bellaire's Little League baseball team entered the Little League World Series in 2000; the team lost to the team of Maracaibo, Venezuela. In 2002 Bellaire's little league team was placed in the same league as the West University Place team. Previously they played in separate leagues.

All content from Kiddle encyclopedia articles (including the article images and facts) can be freely used under Attribution-ShareAlike license, unless stated otherwise. Cite this article:
Bellaire, Texas Facts for Kids. Kiddle Encyclopedia.