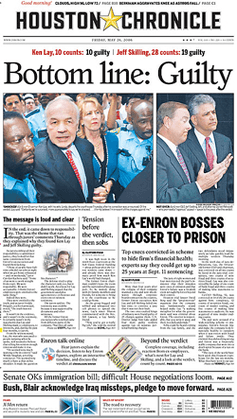 The Houston Chronicle is the largest daily newspaper in Texas, USA. As of March 2007, it is the ninth largest newspaper circulating in the United States. With the demise of its long-time rival the Houston Post, its nearest major competitors are located in Dallas-Fort Worth.

All content from Kiddle encyclopedia articles (including the article images and facts) can be freely used under Attribution-ShareAlike license, unless stated otherwise. Cite this article:
Houston Chronicle Facts for Kids. Kiddle Encyclopedia.