March is the third month of the year in the Gregorian calendar, coming between February and April. It has 31 days. March is named after Mars, the Roman god of war. 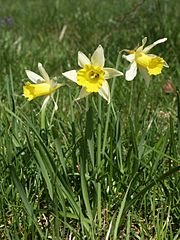 The daffodil is a symbol of the month of March, when spring begins in the Northern Hemisphere.

In ancient Rome, March was called Martius. It was named after the war god (Mars) and the Romans thought that it was a lucky time to begin a war. Before Julius Caesar's calendar reform, March was the first month of the year in the Roman calendar, as the winter was considered to be a monthless period.

In terms of seasons, March is one of two months to have an equinox (the other is September, its seasonal equivalent in both hemispheres), with daylight and darkness of roughly the same number of hours, halfway between the December and June solstices. In the Northern Hemisphere, spring starts in this month, while it is autumn in the Southern Hemisphere.

Start of the season

The official start of either season is March 1, though the equinox can fall on March 20 or 21, occasionally on March 19. The northern spring equinox marks the start of the Iranian New Year and Baha'i New Year. It is from the March 21 date that Easter's date is calculated, on the Sunday after the first full moon in spring, meaning it can fall between March 22 and April 25 in Western Christianity. 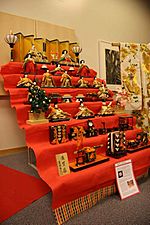 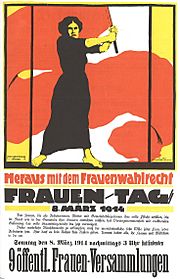 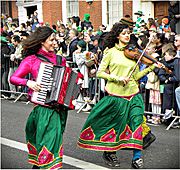 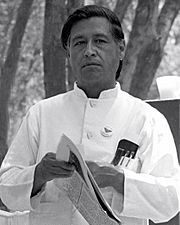 Cesar Chavez, whose birthday is observed in the US on March 31.

Devastation caused by the earthquake and tsunami in Japan on March 11, 2011. 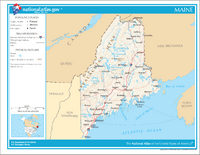 Painting showing the US's agreement on March 30, 1867 to buy Alaska from Russia. 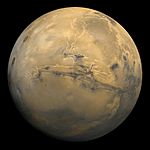 The planet Mars, also named after the Roman god of war.

All content from Kiddle encyclopedia articles (including the article images and facts) can be freely used under Attribution-ShareAlike license, unless stated otherwise. Cite this article:
March Facts for Kids. Kiddle Encyclopedia.