November is the eleventh and penultimate (second-last) month of the year in the Gregorian calendar, coming between October and December. It has 30 days. Its name is from the Latin word novem, which meant "nine". It was the ninth month of the year before January and February were added to the Roman Calendar.

November's flower is the Chrysanthemum. Its birthstone is the topaz. The meaning of the topaz is fidelity.

Early November sunset in Switzerland, where it is an Autumn month.

November is the eleventh month of the year in the Gregorian calendar, after October and before December, which is the last month. November has 30 days. It was the ninth month in the old Roman calendar, which is where its name comes from. It kept its name when January and February were added to the beginning of the year, despite becoming the eleventh month. The ninth month is now September.

In the Northern Hemisphere, November is an Autumn (Fall) month, and the further north in the hemisphere, the more likely it is to get colder as December approaches. In the Southern Hemisphere it is a Spring month. In each hemisphere, it is the seasonal equivalent of May in the other.

Several observances around the beginning of the month are believed to be related, linked to the old Celtic celebration of Samhain on November 1. These events include Halloween (October 31), Day of the Dead in Mexico (October 31 to November 2), All Saints Day (November 1) and All Souls Day (November 2).

In several mainly Christian countries, it is month in which people who died in war are commonly remembered, mainly related to the end of World War I on November 11, 1918. Near the end of the month Advent, the period leading up to Christmas, begins.

The astrological signs for November are Scorpio (October 22 to November 21) and Sagittarius (November 22 to December 21). The birth flower is the chrysanthemum and the birth stone is the topaz.

All Saints Day at a cemetery in Poland. 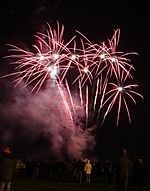 Guy Fawkes Night celebration on November 5 in the UK. 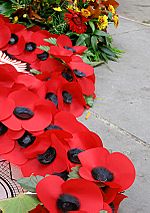 Poppies symbolise Remembrance Day in the UK on November 11.

The Flag of Scotland, with the cross of Saint Andrew, whose feast day is November 30.

Painting showing celebration of Thanksgiving Day, celebrated in the US on the fourth Thursday in November.

Earthquake and Tsunami damage in Lisbon on November 1, 1755.

Guy Fawkes is arrested for his part in the Gunpowder Plot on November 5, 1605.

The tomb of Tutankhamun, which Howard Carter entered on November 26, 1922.

All content from Kiddle encyclopedia articles (including the article images and facts) can be freely used under Attribution-ShareAlike license, unless stated otherwise. Cite this article:
November Facts for Kids. Kiddle Encyclopedia.