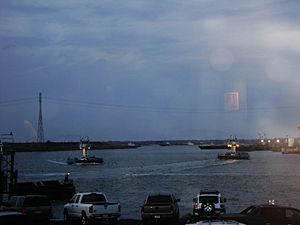 In 1822, Nathaniel Lynch built a ferry to cross the San Jacinto River just below where Buffalo Bayou flows into it. The ferry connected what would become the community of Lynchburg, on the east side of the crossing with the road to Harrisburg. At the western landing is the location of the San Jacinto Battlefield where Texan forces under Sam Houston defeated Antonio López de Santa Anna's Mexican forces in 1836.

All content from Kiddle encyclopedia articles (including the article images and facts) can be freely used under Attribution-ShareAlike license, unless stated otherwise. Cite this article:
Lynchburg, Texas Facts for Kids. Kiddle Encyclopedia.