Hedwig Village is a city in Harris County, Texas, United States. The population was 2,557 at the 2010 census.

The United States Postal Service uses "Houston" for all Hedwig Village addresses; "Hedwig Village" is not an acceptable city designation for mail addressed to places in Hedwig Village.

As of 2014, Hedwig Village is not considered to be within Houston proper as it is a separate incorporated city.

The Spring Branch Memorial area was originally settled by German immigrants in the 19th century. Hedwig Village's name originates from Hedwig Road, which was built on the property of Hedwig Jankowski Schroeder; Schroeder emigrated from Germany to Texas in 1906 to help her sister operate a business in Houston. There she met, and married, Henry Schroeder, son of Jacob Schroeder one of the area's earliest immigrants. They established their home and farmed in the area now Hedwig Village

According to the United States Census Bureau, the city has a total area of 0.9 square miles (2.3 km2), all of it land. This makes Hedwig Village one of the smallest municipalities in Harris County. Hedwig Village is 10 miles (16 km) from Downtown Houston.

There were 956 households out of which 35.8% had children under the age of 18 living with them, 55.6% were married couples living together, 11.2% had a female householder with no husband present, and 30.1% were non-families. 27.4% of all households were made up of individuals and 9.9% had someone living alone who was 65 years of age or older. The average household size was 2.44 and the average family size was 2.99.

When Hedwig Village was first established, houses were similar to ranch houses and there were more private dirt roads than paved streets. Katy Road (now Interstate 10, Katy Freeway) had many neighborhood stores, according to Laverne Coller.

In 2003, Edith Spang, a former librarian at the Spring Branch Memorial Branch Library quoted in the Houston Chronicle, said that as time passed, the civic locations, including the library; the medical care facilities; the shopping venues; and the traffic were all parts of Hedwig Village's growth Spang remarked that Hedwig Village "has definitely changed along with the other villages. It's lost the sleepy little country atmosphere." Coller said that none of the stores that had originally existed when she moved still existed by 2003. 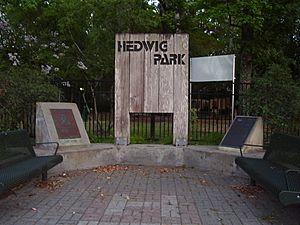 The city operates Hedwig Park. The Corbindale Road park has picnic areas and gazebos. It is in proximity to the Spring Branch Memorial Library. The Houston Business Journal said "Children find the location especially exciting because it's just across the street from the Village Fire Department." A park in Hedwig Village is named after Hedwig Jankowski Schroeder.

All content from Kiddle encyclopedia articles (including the article images and facts) can be freely used under Attribution-ShareAlike license, unless stated otherwise. Cite this article:
Hedwig Village, Texas Facts for Kids. Kiddle Encyclopedia.