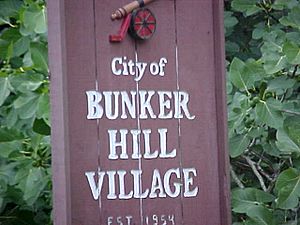 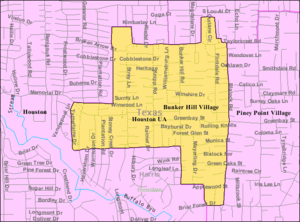 Prior to the city's incorporation, German farmers settled the area and built sawmills to process local lumber. A 1936 county highway map states that the area had scattered residences near one of its sawmills.

In the mid-1950s, effort to form a Spring Branch municipality failed. The city incorporated in December 1954 with a mayor-council government. Because of the 1954 incorporation, Houston did not incorporate Bunker Hill Village's territory into its city limits, while Houston annexed surrounding areas that were unincorporated. In 1962 the city had 2,216 people. By 1966 Bunker Hill Village became affluent and had two public schools and two churches. In 1981 4,442 people lived in Bunker Hill Village.

In 2008, Forbes.com selected Bunker Hill Village along with Sugar Land and Hunters Creek Village as one of the three Houston-area "Top Suburbs to Live Well" of Houston.

According to the United States Census Bureau, the city has a total area of 1.5 square miles (3.9 km2), all of it land.

There were 1,226 households, out of which 44.4% had children under the age of 18 living with them, 83.5% were married couples living together, 4.1% had a female householder with no husband present, and 11.5% were non-families. 10.5% of all households were made up of individuals, and 7.4% had someone living alone who was 65 years of age or older. The average household size was 2.97 and the average family size was 3.19. 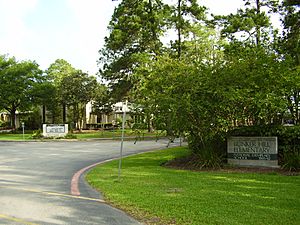 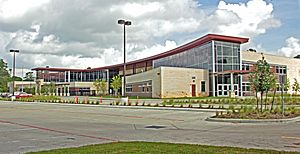 Spring Branch ISD (and therefore the city of Bunker Hill Village) is served by the Houston Community College System. The Northwest College operates the nearby Town & Country Square Campus in Houston.

All residents are assigned to Wildcat Way School in Houston for preschool.

All of Bunker Hill Village is served by Memorial High School, which is located in Hedwig Village.

All content from Kiddle encyclopedia articles (including the article images and facts) can be freely used under Attribution-ShareAlike license, unless stated otherwise. Cite this article:
Bunker Hill Village, Texas Facts for Kids. Kiddle Encyclopedia.