Hunters Creek Village is a city in Harris County, Texas, United States, part of the Houston–The Woodlands–Sugar Land metropolitan area. The population was 4,367 at the 2010 census. It is part of a collection of upscale residential communities in west Houston known as the Memorial Villages.

Prior to the incorporation of Piney Point Village, German farmers settled the area and opened sawmills. By 1936 the community had a sawmill and several residences.

In the mid-1950s, effort to form a Spring Branch municipality failed. The city incorporated in 1954 with a mayor-alderman government. Because of the 1954 incorporation, Houston did not incorporate Hunters Creek Village's territory into its city limits, while Houston annexed surrounding areas that were unincorporated. By 1966 year the community had a school and a church. Between 1960 and 1980 the population increased from 2,478 to 4,580. In 1982 the population fell to 4,215. 4,598 people lived in Hunters Creek Village in 1990.

In 2008, Forbes.com selected Hunters Creek Village, along with the adjacent community of Bunker Hill Village and (southwest suburban) Sugar Land, as one of the three Houston-area "Top Suburbs To Live Well."

According to the United States Census Bureau, the city has a total area of 1.9 square miles (4.9 km2), all of it land. 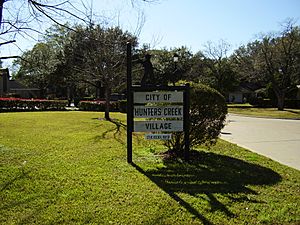 There were 1,471 households out of which 43.6% had children under the age of 18 living with them, 82.9% were married couples living together, 3.9% had a female householder with no husband present, and 12.2% were non-families. 11.1% of all households were made up of individuals and 7.7% had someone living alone who was 65 years of age or older. The average household size was 2.97 and the average family size was 3.19. The current mayor of Hunters Creek Village is Steven Reichek, as of August 2006.

Most of Hunters Creek Village is within the 77024 ZIP code, while the section south of the Buffalo Bayou has the 77063 ZIP code.

All content from Kiddle encyclopedia articles (including the article images and facts) can be freely used under Attribution-ShareAlike license, unless stated otherwise. Cite this article:
Hunters Creek Village, Texas Facts for Kids. Kiddle Encyclopedia.