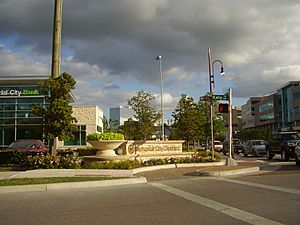 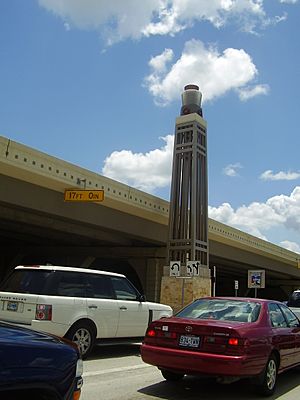 A five story obelisk installed along Interstate 10 in 2009

The Texas Legislature created the Memorial Management District in 1999.

By July 2009 the district planned to create identifying markers to mark the area as Memorial City. In late 2009, the district installed four five-story obelisks with lighted tops along Interstate 10. The $548,000 ($548000.00 when adjusted for inflation) used to fund the improvements originated from commercial businesses within the district boundaries subjected to assessments for improvement.

The district is along Interstate 10 between Beltway 8 and Bunker Hill Road. While consisting mainly of retail, medical and office complexes, the district includes four apartment complexes with a combined total of 988 units. One, the Terrace at Memorial City, is only for senior citizens. The Villas at Bunker Hill is located north of the Memorial City district boundary at the southwest corner of Bunker Hill and Pine Lake Drive.

As is the case in several of the special management districts of Houston, Memorial City uses street name signage of a different graphic design style and color scheme than the standard white-on-green signs used in many neighborhoods throughout the city.

All content from Kiddle encyclopedia articles (including the article images and facts) can be freely used under Attribution-ShareAlike license, unless stated otherwise. Cite this article:
Memorial City, Houston Facts for Kids. Kiddle Encyclopedia.