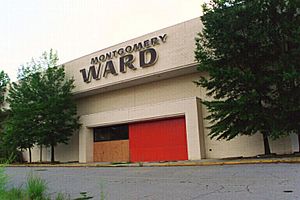 It started as a mail-order catalog (called a "Wish Book") and department store in 1872. It owned Jefferson Ward discount stores. Jefferson Ward stores in the northern US were sold to Bradlees in 1985. The rest closed in 1988. All its stores closed in 2000. In 2004, it reopened as an online store.

All content from Kiddle encyclopedia articles (including the article images and facts) can be freely used under Attribution-ShareAlike license, unless stated otherwise. Cite this article:
Montgomery Ward Facts for Kids. Kiddle Encyclopedia.